A cattle stampede in Pico Rivera? Yes, you heard that right 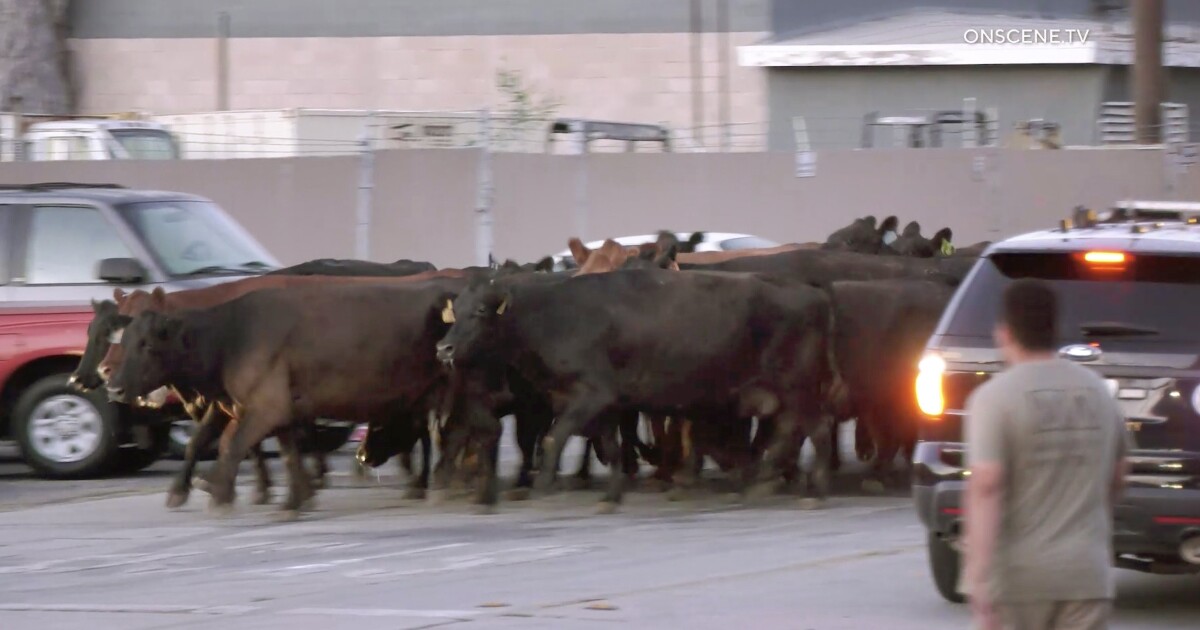 It was an unusual sight, especially for Los Angeles: a herd of cattle galloping through the streets of Pico Rivera for nearly an hour, before making their way into a residential neighborhood.

By Wednesday morning, 38 of the 40 animals had been captured and loaded into trailers. One was still missing, and one was dead.

The deceased cow had charged at a family of four, knocking some of them to the ground, officials said. A deputy shot the animal to protect the family.

But just how a herd of cattle arrived in a sleepy cul-de-sac off Friendship Avenue is another story.

According to official reports, the cattle escaped from Manning Beef, a slaughterhouse in the 9500 block of Beverly Road. People watching the scene play out on TV and online took to social media to weigh in, with many rooting for the cattle to find freedom.

“Free all the cows in Pico Rivera, it’s the least they deserve!” said one person on Twitter.

“I say give ‘em freedom if they escape,” said another.

Sheriff’s officials said the cattle escaped from the slaughterhouse through a gate that had accidentally been left open.

According to David Rosengard, a managing attorney at the Animal Legal Defense Fund, the cattle probably would have been frightened and confused as they made their way through the suburban area.

“Cows are very empathic, very social creatures. They’re very intelligent,” he said. “I would imagine they were probably pretty scared when they were running around that neighborhood…. They had no idea where they were or what was happening.”

One video posted to Facebook showed the animals moving quickly down a road near Beverly Boulevard before turning, as a herd, onto another path.

A rancher who arrived to help corral the cattle told CBS that the roundup was challenging, and that one animal dragged him a couple of hundred feet.

“Once you start running after them, they get scared, they get anxious and they just don’t want to stop running,” John Pitons said.

The chaotic scene lasted long after the sun set. Sheriff’s vehicles with flashing lights could be seen pursuing cattle down streets while helicopters with searchlights loomed overhead. Mounted deputies also responded to the scene.

Onlookers flocked to the area to capture cellphone videos as cars whizzed down the nearby boulevard, honking as they passed.

Later footage captured by OnScene.TV showed the dead cow lying in the street, its massive body transformed into a lifeless mound.

The laws governing whether law enforcement can shoot livestock in California are similar to those around shooting dogs — an unpopular but not completely uncommon occurrence, Rosengard said. There are, generally, exemptions to cruelty laws for necessary or justifiable acts.

“Assuming the officer honestly believed there were humans in danger and it was necessary or justifiable to shoot the cow, then that’s probably not a cruel act,” he said.

In a Facebook post, Pico Rivera City Councilman Andrew Lara said he had received official reports that several of the cattle were aggressive and had collided with cars. The one who was shot had charged at a family with two small children, he said.

Although many associate meat processing plants with rural areas, there are at least four such facilities in the Pico Rivera area alone, said Buckley McKay, a spokesman for the U.S. Department of Agriculture.

“There are way more small and very small establishments than you would think,” McKay said, including some that are less than 1,000 square feet with only three or four employees. He could not comment on Manning’s operation specifically, but said because it’s in a dense urban area, it is likely to be a smaller establishment.

It wasn’t the plant’s first time making headlines: In 2020, actor Joaquin Phoenix worked with Los Angeles Animal Save and Farm Sanctuary to rescue a cow and her calf from slaughter at Manning. In a statement at the time, Phoenix thanked Manning Chief Executive Anthony Di Maria for opening his heart.

“We must take pause to acknowledge and celebrate the victories and the people who helped achieve them,” he said.

One longtime resident of the neighborhood, who asked to remain anonymous for privacy, said that he drives by the slaughterhouse on his way to work and that there are often animal rights activists outside holding signs.

“I’m very curious if someone freed the animals on purpose,” he said.

But some residents rooting for the cows noted the irony of rounding them up only to return them to the slaughterhouse.

PETA President Ingrid Newkirk said in a statement that she hoped those cheering for the cattle’s escape or mourning their deaths will consider going vegan.

It’s possible that law enforcement, city officials or members of the public will file claims for damages, Rosengard said. Ultimately, the cattle are still the property of their owners.

And while sending them to a sanctuary or rescue is always an option, “there’s nothing in the law that forces that outcome,” he said, adding that the cattle will probably be returned to the slaughterhouse.