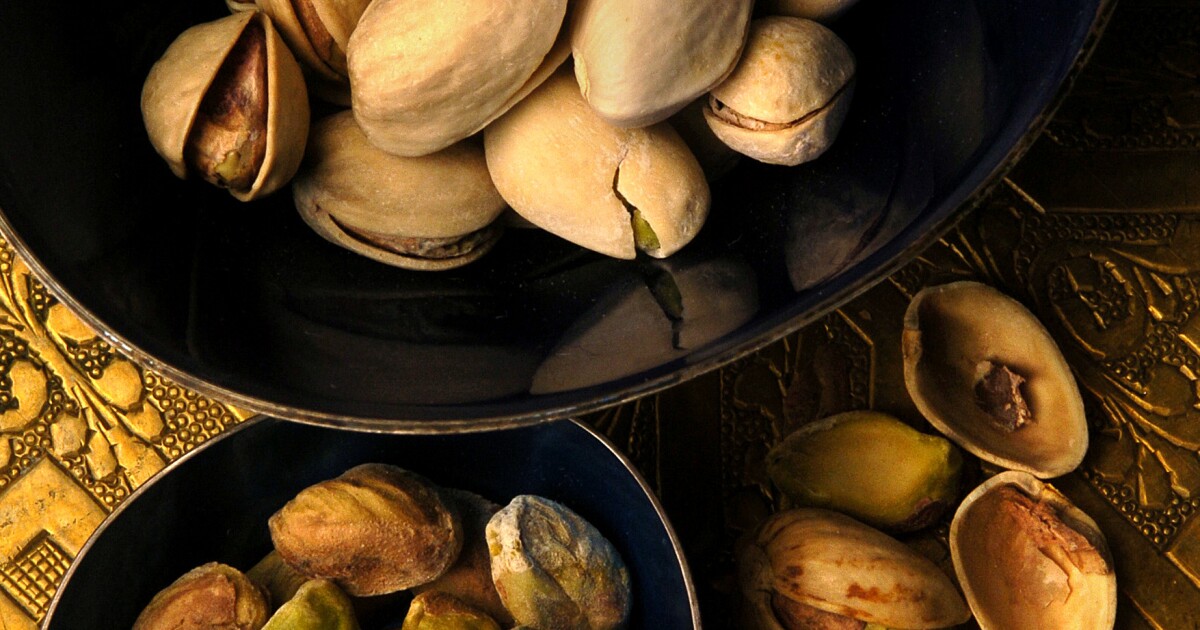 While completing orders and going over inventory, employees at a San Joaquin Valley pistachio company realized something didn’t add up.

They seemed to be missing some nuts — and more than just a few.

An audit launched earlier this month revealed that roughly 42,000 pounds of pistachios had vanished.

It didn’t take authorities long to crack the case.

A day later, deputies found a cargo container filled with about 21 tons of nuts in Delano, near the border of Tulare and Kern counties, said Sgt. Joseph England, who leads the Tulare County sheriff’s Agricultural Crimes Unit.

Deputies arrested Alberto Montemayor, 34, on suspicion of grand theft in connection with the stolen nuts, which were valued at more than $170,000, England said.

It appeared the pistachios were in the process of being repackaged to be sold, with the nuts being moved from 2,000-pound sacks into smaller bags, sheriff’s officials said. About 40,000 pounds of the nuts were recovered and returned to Touchstone Pistachio. Investigators said there was evidence the rest had already been sold.

With truckloads of nuts potentially worth hundreds of thousands of dollars, authorities in the Central Valley say nut theft is more common than you might think.

David Alavezos, an assistant district attorney in Tulare County, said stealing nuts is a “really common crime” in the region.

About 99% of the country’s pistachios are grown in California, and roughly 97% of that is grown in the San Joaquin Valley, according to Richard Matoian, president of the American Pistachio Growers, a Fresno-based trade organization.

Pistachios can sell for $8 to $9 a pound, a pretty penny for farmers — and thieves.

Tulare County employs a full-time prosecutor and an investigator dedicated to agricultural crimes, which range from cattle rustling to stealing expensive tractors.

But unlike livestock and farm equipment, which can be individually marked, nuts are harder to track. They also are nonperishable, so they don’t need to be immediately offloaded or refrigerated when they are taken.

Pistachios are the “biggest-ticket item” in local agricultural theft, England said, noting there are typically one or two “significant” heists a year.

Last year, the Sheriff’s Office arrested a man on suspicion of stealing about $295,000 worth of stolen pistachios.

Nut thefts run the gamut in complexity, experts say — from sophisticated hacking jobs to grab-and-run crimes that fluctuate with the growing season.

More complex schemes might involve someone on the inside altering invoices or intentionally not reporting missing inventory. Fraudsters may claim a delivery is not up to par and decline payment beyond an initial investment. Some thieves even play a long game, paying for truckloads of nuts until they earn a grower’s trust. Then they skip out on a large order.

After the nuts are harvested, they’re often left in truck trailers on the side of the road to be taken to a processing plant. It’s “relatively easy” for someone to hook up the trailer and drive off, Matoian said.

And every year, would-be thieves follow harvesting equipment designed to shake nuts from the trees, loading up gunny sacks with the fallen fruits. Though these are lower-value thefts, they can add up, England said.

“It’s not that much if it’s just a sack here or a sack there. But they’ll be throwing that into a truck, and it’s kind of death by a thousand cuts for a lot of farmers.”

That’s when hackers began purloining information about specific orders from online portal systems used by companies bidding to transport products. Once details are obtained, the thief typically shows up at a facility with all the right information — order number, quantity expected, brand name — and may even give the name of the trucker slated to arrive.

“What we have seen recently is a very sophisticated kind of a white-collar crime — digital crime — that’s occurring within the industry,” he said.

Montemayor works for a family-owned trucking company that contracts with Touchstone Pistachio Co. Among other things, investigators tracked the missing Touchstone Pistachio nuts by reviewing video from several outlets, including the processing plant, and checking inventory paperwork, England said.

According to Matoian, the nuts were a relatively “finished product,” meaning they had already been processed, which can include sorting and sometimes roasting and salting. Nuts that haven’t been processed can be harder to sell.

Stealing a finished product “requires a lot more sophistication” to pull off.