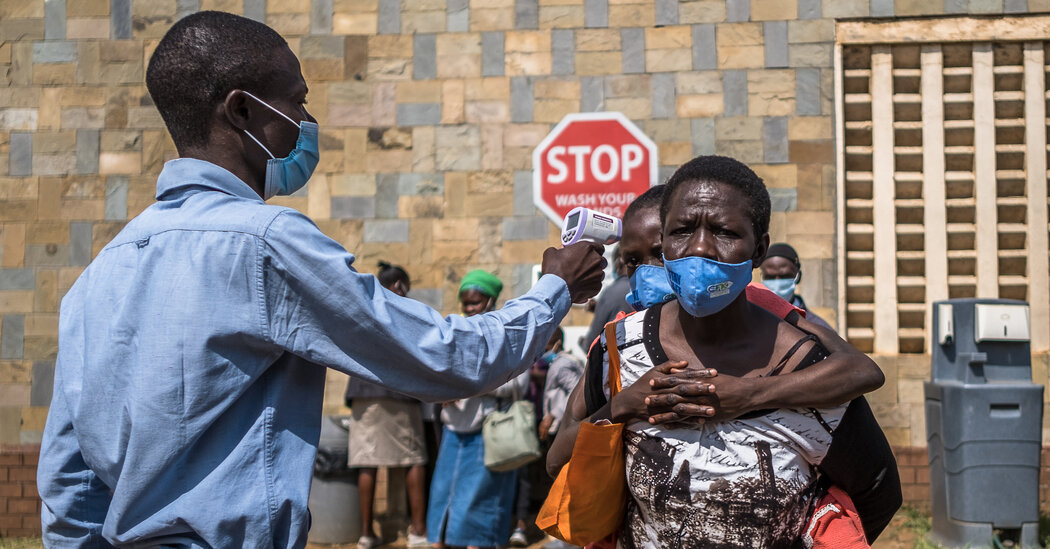 The pandemic is worsening in Africa as more-contagious coronavirus variants spread and hospitals in some places are pushed beyond their limits. Less than 1 percent of the continent’s people have been even partly vaccinated.

The situation is particularly bad in Kenya, where the Delta variant was found for the first time, in Kisumu County. There is now a 23 percent positivity rate in Kisumu, with the virus sickening mostly young people. Health officials say they fear a catastrophic wave like the one that ripped through India this spring.

Covid-related deaths in Africa climbed week over week by more than 20 percent, based on available data from almost 40 nations, the W.H.O. said. But experts warn that the true scale far exceeds reported figures. Testing and tracing remain a challenge for many countries, and many do not collect mortality data.

Chinese vaccines: Countries like Mongolia, Bahrain and the Seychelles put their faith in easily accessible Chinese-made vaccines. But instead of freedom from the coronavirus, all three nations are now battling a surge in infections, despite high rates of vaccination.

How Brexit stole the charm of an idyllic British village

Five years after Britons voted to leave the E.U., the aftershocks are still being registered. But few places have felt its impact more than England’s southeast corner, close to Channel ports and the white cliffs of Dover, where a majority voted for Brexit.

The pretty village of Mersham, population about 1,000, is now home to the 24-hour Sevington Inland Border Facility, a post-Brexit border checkpoint. Every evening, hundreds of floodlights from where the trucks are parked illuminate the skyline. Villagers complain of dust, construction noise and trucks blasting their horns and getting stranded on tiny rural roads.

When Britain was in the E.U., the trucks that flowed ceaselessly to and from France did so with few checks. But Brexit has brought a blizzard of red tape, requiring the government to build the checkpoint. Though the problems for villagers are numerous, local officials think few have changed their pro-Brexit stance.

Quotable: “When you talk to somebody and you say where you live, they used to say, ‘Oh by the quaint church.’ Now they say, ‘By the lorry park,’” said one local resident.

The Vatican pushes back on gay rights bill

The Vatican has expressed deep reservations to the Italian government about a proposed gay rights bill, prompting cries of church interference from liberal politicians and gestures of gratitude from conservatives.

Those supporting the legislation say it offers L.G.B.T.Q. Italians overdue protections from violence and discrimination. But the Vatican believes that the bill infringes upon guaranteed religious liberties and that it might expose key church beliefs, such as ordaining only men and not recognizing same-sex marriage, to charges of criminal discrimination.

Analysis: Church historians said a letter about the bill from the Holy See’s foreign minister amounted to a unique escalation of Vatican attempts to influence the affairs of the Italian state. “It’s an unprecedented act,” said Alberto Melloni, a church historian in Rome.

In other news: The soccer body UEFA refused to allow Munich to illuminate its stadium in the rainbow colors of the Pride flag, which Munich had intended to do in protest of a recent Hungarian law that critics say targets the L.G.B.T.Q. community.

For years, Britney Spears has urged changes to the conservatorship arrangement that controls her life, and her father’s role in leading it, according to confidential court records obtained by The Times. She is scheduled to address a Los Angeles court about it today.

Even as she earned millions from a successful Las Vegas residency, Spears said she was limited to a $2,000 weekly allowance, according to the records. Any mistakes resulted in “very harsh” consequences.

The Olympics, by the numbers

For more than a year, rising coronavirus case counts and struggling vaccination programs have made some hesitant about the Games. A month before the opening ceremony, our reporters examined — through the lens of some critical, and very large, numbers — why the Olympics are still going ahead.

$15.4 billion: The value of investment in Tokyo’s new national stadium that will go (mostly) down the drain if it stands empty on the night of the opening ceremony

37%: The current favorability rating for Japan’s prime minister, Yoshihide Suga, who may fear his political fortunes are now tied too closely to the Games to cancel them.

15,500: The number of athletes who will have to put their lives on hold for a year if the Olympics are postponed yet again.

$4 billion: The potential amount of television-rights income that the International Olympic Committee may have to refund if the Olympics are not held. (It accounts for 73 percent of the I.O.C.’s revenue.)

That’s it for today’s briefing. Thanks for joining me. — Natasha

P.S. The Times is introducing gift articles, a way for subscribers to share 10 articles each month with people who don’t subscribe.

The latest episode of “The Daily” is about how the issue of policing has figured into the New York City mayoral race.

You can reach Natasha and the team at [email protected].

U.S. to Allow Some Asylum Seekers Rejected Under Trump to Reopen Cases