Russia Says It Fired Warning Shots at a U.K. Warship Near Crimea 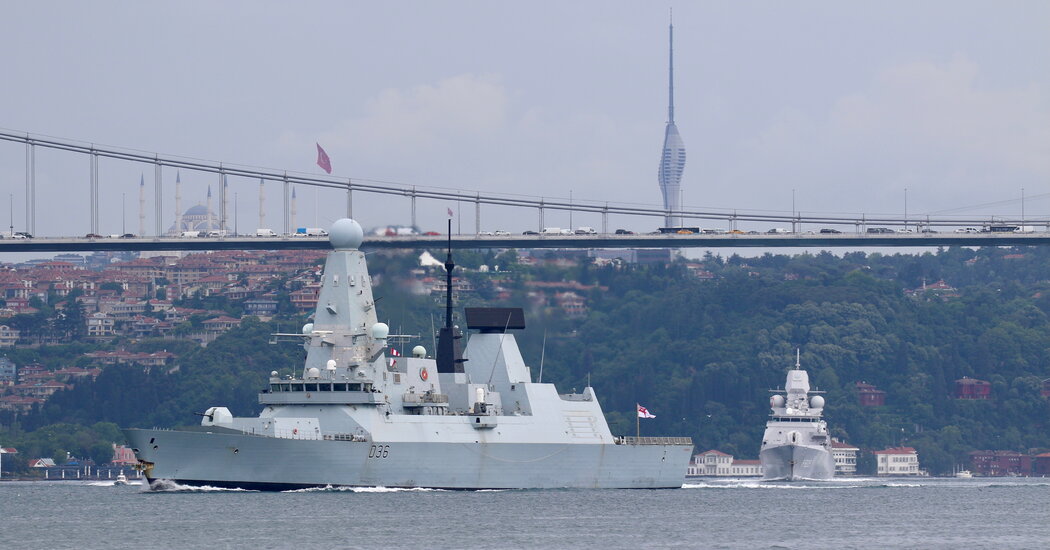 MOSCOW — The Russian Defense Ministry said on Wednesday that one of its naval vessels had fired warning shots at a British destroyer near Crimea in the Black Sea and that a Russian fighter jet had dropped bombs in the destroyer’s path after it entered Russian waters, claims that were quickly denied by Britain.

“We believe the Russians were undertaking a gunnery exercise in the Black Sea and provided the maritime community with prior warning of their activity,” Britain’s Ministry of Defense said of the incident involving the destroyer Defender. “No shots were directed at H.M.S. Defender and we do not recognize the claim that bombs were dropped in her path.”

That account was at sharp variance with the initial Russian reports from Interfax, citing Russia’s Defense Ministry, which said that the British ship had ventured almost two miles inside Russia’s territorial waters and had retreated immediately after the purported confrontation.

The ministry said the standoff took place near Cape Fiolent, near the port city of Sevastopol, where Russia maintains a large naval base.

“The destroyer had been warned that weapons would be used if it trespasses the Russian border,” the ministry said in a statement.

Britain also denied that Russian claim, saying that the ship had been participating in NATO exercises at the time.

“The Royal Navy ship is conducting innocent passage through Ukrainian territorial waters in accordance with international law,” the ministry said in a statement on Twitter.

In 2014, Russia annexed the Crimean Peninsula from Ukraine in a move that prompted international condemnation and sanctions. Since then, the area around the peninsula in the Black Sea has become a point of military friction between Russia, Ukraine and NATO countries.

In April, Russia set off alarms by massing tens of thousands of troops on its border with eastern Ukraine. Weeks later, it withdrew most of the forces, saying they were just conducting exercises. By then, it had elicited an invitation from President Biden for a summit meeting, which analysts said had been a clear objective for President Vladimir V. Putin from the beginning.

Russia has conducted frequent threatening overflights in the vicinity of NATO airspace in northern Europe. In March, NATO scrambled fighter planes 10 times in six hours to intercept Russian planes it said were near alliance airspace in the North Atlantic, North Sea, Baltic Sea and Black Sea.

In a statement on Wednesday reacting to reports of the Russian actions, Ukraine’s foreign minister, Dmytro Kyleba, called Russia’s actions in the Black Sea routinely “aggressive and provocative,” adding that Russia’s “militarization of Crimea poses a lasting threat to Ukraine.”

Fauci says delta accounts for 20% of new cases in U.S.