Read what Britney Spears said at her conservatorship hearing 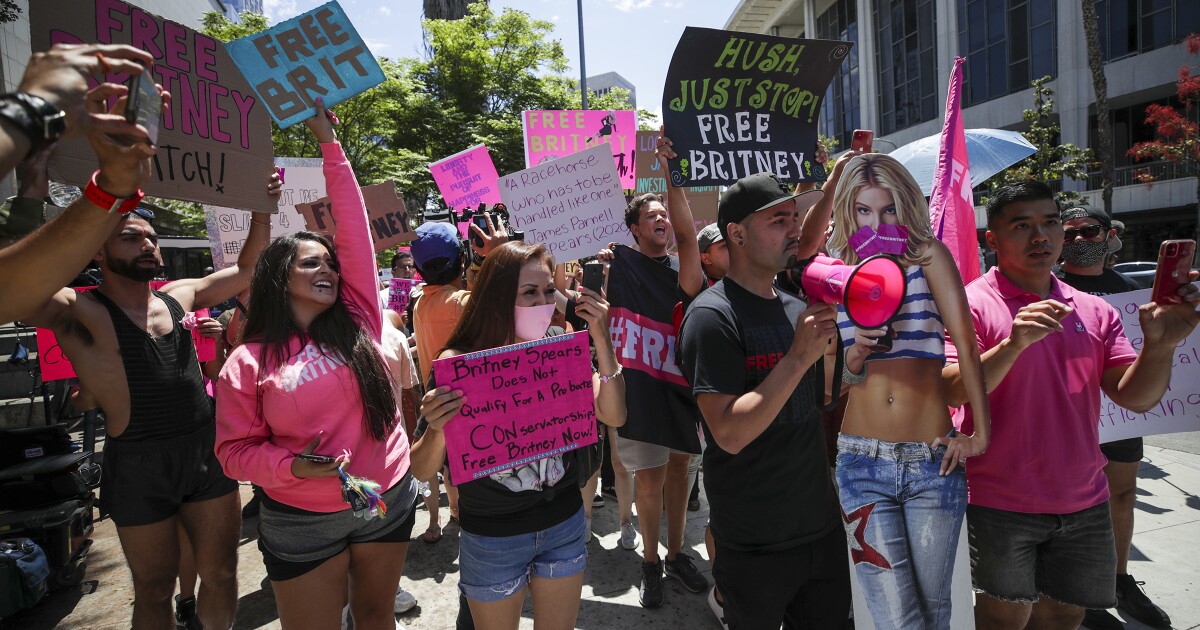 Britney Spears has finally confirmed what many fans have long suspected: She wants out.

“I truly believe this conservatorship is abusive,” the pop star said Wednesday during a court appearance via telephone for a hearing in her case. “I want to end the conservatorship without being evaluated.”

Speaking rapidly and occasionally losing her place in her prepared notes, Spears shared her version of the events of the last two years or so, since she last addressed the court.

“I will be honest with you — I haven’t been back to court in a long time because I don’t think I was heard on any level when I came to court,” the singer said, talking about her 2019 appearance at a closed hearing.

Spears, 39, said she lied the last time she was in court when she said she was happy.

“Now I’m telling the truth, OK, I’m not happy. I’m so angry it’s insane, and I’m depressed. I cry every day,” she said. All the state of California seemed able to do, she said, was to hire people using her money to complicate her life.

The hearing was held in person at Stanley Mosk Courthouse in downtown L.A., with an overflow room holding additional spectators. Spears appeared via telephone, while the attorneys and others involved with the conservatorship appeared via video. The singer’s parents also attended virtually. No recording of the hearing was permitted, and cameras, cellphones and laptops were banned in the courthouse.

Spears talked about rehearsals ahead of her canceled Vegas residency, in which “I wasn’t good — I was great,” teaching 16 dancers at a time. But she said her manager had told a different tale, saying she wasn’t taking her medication and wasn’t cooperating in rehearsals. When she was told she didn’t have to do an upcoming Las Vegas show, she said, it was like having “200 pounds” lifted off her.

But a few days later, she said, her doctor put her on lithium, a medication that made her feel drunk. And nobody would help her, she said. Rather, there were all sorts of new people in her home, she had no privacy, and she wasn’t allowed to leave.

“Not only did my family not do a goddamn thing,” Spears said, “my dad was all for it. Anything that happened to me had to be approved by my dad.” She said he acted as though he didn’t know about any of it. She eventually sat through a psychiatric evaluation, she said, and was told she would have to go to a small rehab facility in Beverly Hills.

Spears said her father, Jamie Spears, “loved the control he had over me” at times. “He loved it.”

She took issue with how her conservatorship was handling her therapy appointments, saying she was being forced to go into areas where she was “exposed” to paparazzi and the like when she’d rather do therapy from home. She expressed a desire to have her IUD removed so she could try to have another child but said her team wouldn’t let her do that.

Spears said more than once during the hearing that she might sue her family over how she had been treated. She also told the court she had been unaware that she had the right to petition to end the conservatorship and apologized for her ignorance. Later, her court-appointed attorney, Samuel Ingham III, said he would do whatever his client requested of him.

After a recess, Judge Brenda J. Penny had a few words for Spears, saying, “I just want to commend you again for really stepping forward and stepping out to have your thoughts heard, not only by myself but by everyone involved in this case.” She also noted that any discussion of Spears’ future care plan — for example, when she might need therapy — would need to respect her right to medical privacy.

Jamie Spears’ attorney, Vivian Lee Thoreen, shared a message from her client Wednesday: “He is sorry to see his daughter suffering and in so much pain. He loves his daughter and misses her very much.”

But don’t expect future hearings to feature the “Toxic” singer the way she was featured today. “Since she has made the remarks that she was able to make on the public record today,” Ingham said, conveying a message from Spears, “she believes it will be advisable for proceedings to be sealed going forward.”

Moments later, audio access to the hearing was shut down after the judge discovered someone had been either recording it, live-tweeting it or both.

The pop star, who has tens of millions of followers on social media and an estimated $60 million in her estate, has been operating under the restrictions of the conservatorship since the beginning of 2008. After she was held twice for mental evaluations following erratic behavior, her father was — at his request — given temporary control over her person and her finances.

The conservatorship was made permanent that year, despite its unusual nature. Conservatorships — also known as legal guardianships — are designed to protect people who cannot take care of themselves, such as the elderly, infirm and mentally disabled.

But Spears worked almost nonstop for a decade after hers was implemented: Her last public performance was on tour in late 2018, then she pulled out of a potentially lucrative Las Vegas residency in 2019 before it opened. She said recently on Instagram that she had “no idea” whether she would ever perform again.

Spears’ shrouded life, and her mysterious Instagram account, led to the rise of the #FreeBritney movement: an effort by a group of supporters to end the singer’s conservatorship and raise awareness of conservatorship abuse. Members and other supporters were outside the courthouse Wednesday.

In recent years, Jamie Spears has had certain responsibilities either taken away from him — including when professional fiduciary Jodi Montgomery took over as Britney’s personal conservator in late 2019 after Jamie had a health emergency — or shared: Bessemer Trust Co. was brought in recently as co-conservator of the singer’s estate.

On Tuesday, the New York Times reported on confidential court documents that showed Spears had been quietly pushing back against aspects of her conservatorship for years.

Among the article’s revelations: In 2014, at a closed hearing, Ingham said Spears wanted to explore removing her father as conservator due in part to his alleged drinking. In 2016, a court investigator wrote that Spears considered the conservatorship “an oppressive and controlling tool against her.”

And in 2019 — the year Spears abruptly canceled a potentially lucrative Las Vegas residency supposedly so she could be with her ailing father — she told the court that she’d been forced to perform against her will and to enter a mental health facility.

On Wednesday, Judge Penny also said she had become aware that confidential court documents had been made available to the media, and asked whether anyone present knew anything about that. No one said a thing.