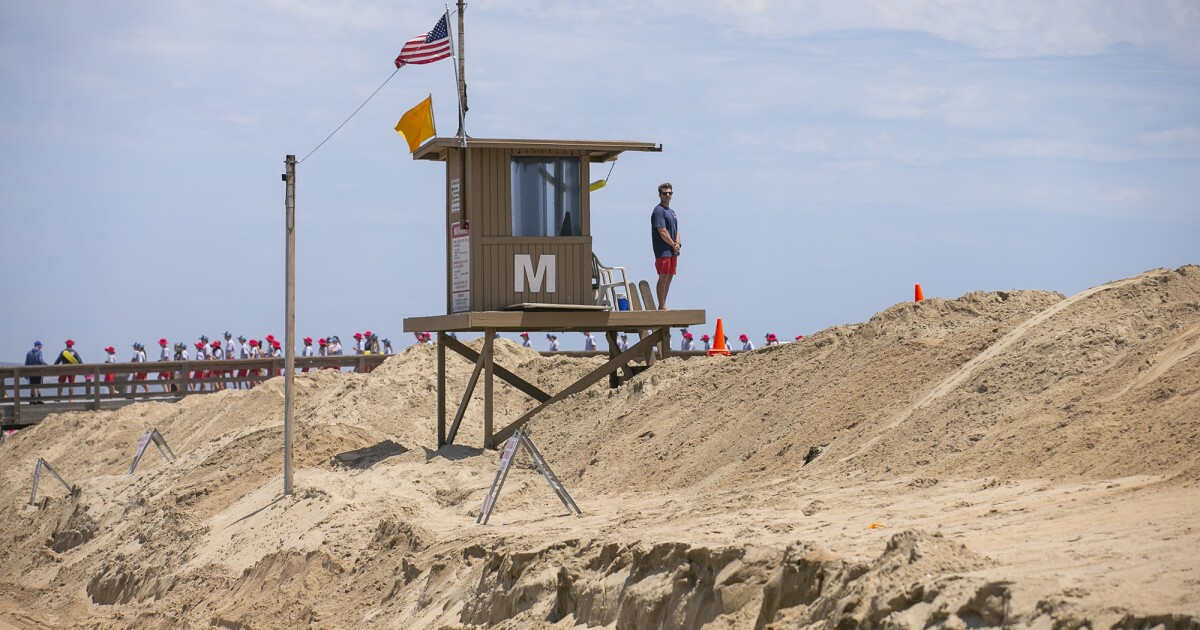 Newport Beach is bracing for possible flooding, with tides of more than 7 feet forecast for Wednesday and Thursday evenings.

City workers are raising sand berms on the Balboa Peninsula and handing out sandbags to residents, hoping to avoid the deluge brought by high waves last Fourth of July.

Any flooding is not expected to be as bad this year, National Weather Service forecasters said, with no significant damage expected.

Tides up to 7½ feet could cause minor flooding and beach erosion Wednesday and Thursday evenings, the weather service said.

“These tides are very high — some of the highest of the year,” said David Sweet, a weather service meteorologist.

Micah Martin, deputy director of public works for Newport Beach, said the city is being extra cautious to protect the shoreline, particularly the Balboa Pier, increasing the height of sand berms and putting public works crews on standby.

Sandbags are available for Newport Beach residents at the city’s Corporation Yard at 592 Superior Ave.

“The high tide in combination with the high surf — that’s where we become vulnerable,” Martin said.

The water poured into a beach parking lot and into nearby homes and driveways. Cars were submerged up to their wheels. Roads became rivers.

It was like a “mini-tsunami,” said John Pope, public information manager for Newport Beach.

Flooding is a recurring issue in the city because much of it was built on areas that were already at or below sea level.

Pope said he doesn’t expect the flooding to be as severe as last year.

“We just got caught off guard,” Martin said. “So this time around, we’re going above and beyond on our shore protection there, so we don’t anticipate any major flooding.”

But, he added, “Mother Nature could always catch us by surprise.”

In Los Angeles County, officials are bringing in sand to reinforce an embankment at Point Dume, which has seen some beach erosion already this week, said Nicole Mooradian, public information officer for the Department of Beaches and Harbors.

South-facing beaches in Southern California will also experience elevated surf of 3 to 6 feet, which can cause rip currents.

Orange County beachgoers are advised to heed warning signs and flags, talk to a lifeguard and always swim near a lifeguard.

There have already been reports of strong rip currents at the affected beaches, Sweet said.

Rock jetties can also be deadly when the waves are high.

The beach hazard alerts could be extended to Friday and Saturday, depending on the conditions, Sweet said.