Munich Wanted to Light Its Stadium in a Pride Rainbow. European Soccer Said No. 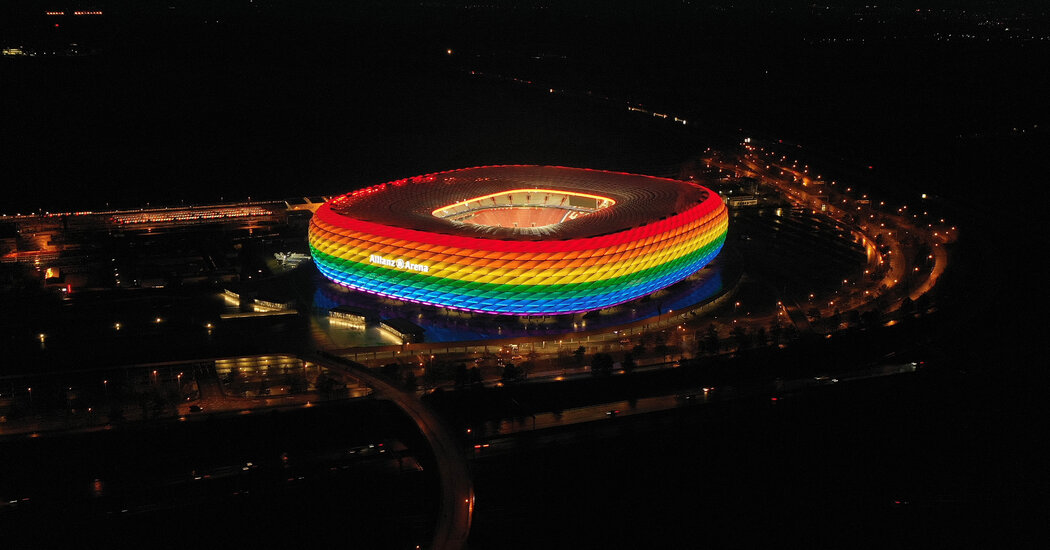 BERLIN — Europe’s governing soccer body refused on Tuesday a request by Munich to illuminate its stadium in the rainbow colors of the Pride flag when Germany meets Hungary in the European soccer championship — an act proposed to protest a recent Hungarian law that critics say is being used to target the L.G.B.T. community.

The governing body, UEFA, said the political nature of the request was a violation of its rules.

“Given the political context of this specific request — a message aiming at a decision taken by the Hungarian national Parliament — UEFA must decline this request,” the organization said in a statement. Neither team commented on the dispute.

The lighting spat is the latest example of the extent to which politics and cultural debates surrounding identity have seeped into the monthlong tournament, which was cast as a way to inject some entertainment and normalcy into societies battered by the coronavirus pandemic.

The proposal earned widespread support in Germany, which ranks 16th in an annual E.U.-funded survey of Europe’s 49 most L.G.B.T.Q.-friendly countries, and boasts lively gay communities in its larger cities, including Munich, Cologne and Berlin. Hungary came in 27th in the annual survey of human rights and equality.

UEFA instead proposed that Munich illuminate the stadium in the rainbow colors on an alternate day, for example, when the Bavarian capital celebrates Pride — a display the city and the arena have made an annual tradition since 2016.

Other teams in Germany’s soccer league have said they would illuminate their empty stadiums in the rainbow during Wednesday’s game. UEFA’s ruling doesn’t apply to their stadiums because they are not hosting official tournament games.

The original plan for lighting the Munich stadium during the championship was turquoise with a green band, UEFA’s colors, alternating with the colors of the national flags of the respective opponents on the days of the games.

Debate surrounding the request drew in authorities in both countries.

“It is extremely harmful and dangerous to mix sports and politics,” Hungary’s foreign minister, Peter Szijjarto, told the MTI news agency in Hungary. “Historical experience shows that this is a bad thing, and the Germans in particular know this very well.”

Chancellor Angela Merkel, commenting through her spokesman, instead sought to highlight the symbolism of the flag, without being drawn into the dispute.

“What does the rainbow stand for? It stands for how we want to live: with respect for one another, without discrimination of minorities who for a long time have been marginalized,” Ms. Merkel’s spokesman Steffen Seibert said. “Certainly most everyone can stand up for that.”

This month, German captain Manuel Neuer drew scrutiny from UEFA for donning a rainbow armband in honor of Pride month. On Monday, the German soccer association, the D.F.B., said in a statement that UEFA had decided to drop the review after determining that the colored stripes worn on the goalkeeper’s left arm served as “as a team symbol for diversity and thus for a ‘good cause.’”

Hungary fans have also come under scrutiny for their conduct during earlier games, both before and during the tournament. Budapest is the only stadium in Europe that is allowing capacity crowds, and French and German media reported hearing an isolated block of fans making monkey noises when N’Golo Kanté, Paul Pogba and Kylian Mbappé — all Black players for France — touched the ball.

Piara Powar, executive director of the FARE Network, an anti-discrimination group, said his organization, which is monitoring behavior inside stadiums during the tournament, received a report of a homophobic banner that was prominently displayed during Hungary’s game against Portugal.

That incident came days after fans jeered Irish national team players that had taken a knee in support of racial equality in a pretournament warm-up game played in Budapest.

UEFA said that it had appointed an ethics and disciplinary inspector to conduct a “disciplinary investigation regarding potential discriminatory incidents” that took place during the matches Hungary played at home against Portugal and France.

London is supposed to host the semifinal and final games of the championship, but if agreements cannot be reached over Covid travel restrictions, Budapest has been widely reported to be UEFA’s alternate location. Sandor Csanyi, an influential Hungarian banker, is a UEFA vice-president.

Dieter Reiter, the Munich mayor, said on Tuesday he would not allow UEFA’s ruling to prevent the city from taking a stand on the issue.

“We will not be prevented from sending a clear signal to Hungary,” he told reporters and vowed to illuminate a wind turbine near the stadium with the rainbow colors and fly the Pride flag from City Hall and other public buildings. “We will make clear that we in Munich stand for equality, for self-determination in sexual identity and in solidarity with all people.”