L.A. city attorney to crack down on online fireworks sales 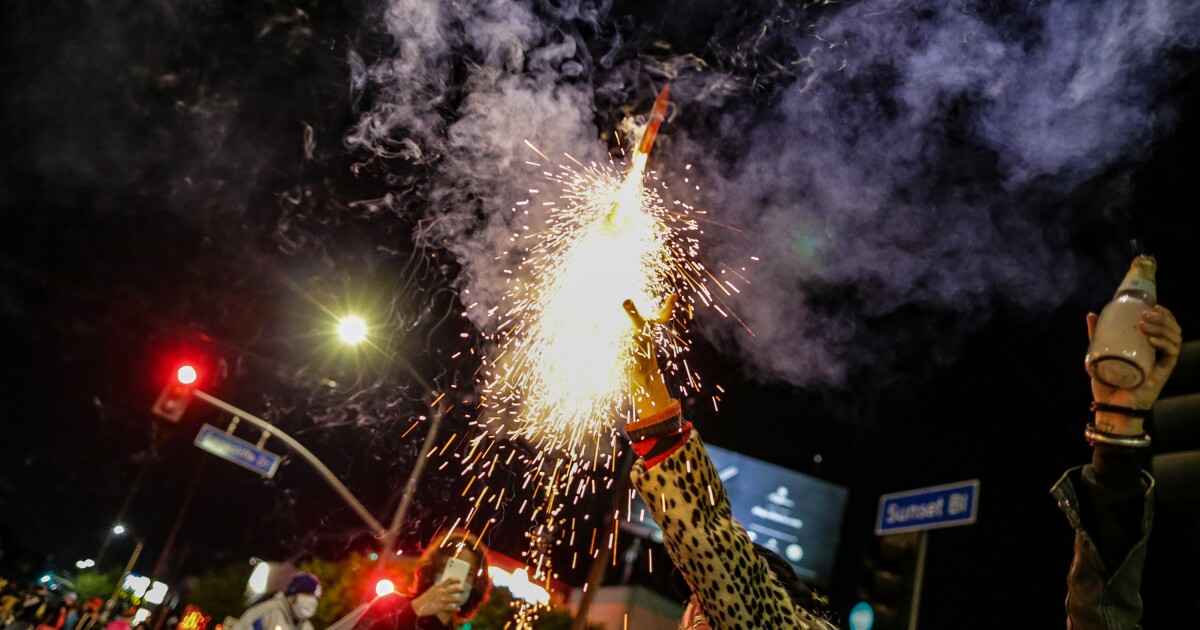 Los Angeles City Atty. Mike Feuer on Tuesday announced he will try to crack down on a favorite illicit pastime: fireworks.

Anyone who has spent a Fourth of July or New Year’s Eve in Los Angeles — or even just a regular Tuesday — has likely been subject to the bangs, booms and sparks that echo through residential neighborhoods.

Playing the role of the city’s responsible parent, Feuer offered a reminder at a news conference Tuesday that fireworks are illegal in the city of Los Angeles and can pose a particular danger in a drought-stricken region.

In an attempt to disrupt the supply chain of fireworks coming into the city, his office will focus in the coming weeks on stopping online sales of the illegal explosives, he said.

His office’s Consumer Protection Unit sent cease-and-desist letters to four online platforms — Facebook Marketplace, Craigslist, 5miles and OfferUp — making it clear that it is unlawful to sell or discharge fireworks in Los Angeles and demanding the removal of sale offers.

“We are at this moment of intense fire risk because of the ongoing drought, and fireworks pose a grave threat,” he said, noting that it can be difficult for police to track down the source of an illegal explosion by the time they arrive at a scene.

Last year on the Fourth of July, the Los Angeles Fire Department responded to 424 more emergency incidents than the daily average, spokesman Erik Scott said. Calls included fires in rubbish, trees, grass and structures that had been parked by the dangerous displays.

In one serious incident, fireworks ignited several large palm trees in Northridge. The flames spread to a neighboring apartment complex, consuming half the building and displacing about 50 residents.

In March of this year, a massive fireworks explosion in San Bernardino County killed two people and led to the evacuation of more than 100 homes. And in Vallejo this week, a 10-acre brush fire that damaged several structures and injured a firefighter has been linked to illegal fireworks.

Despite the Sisyphean nature of the task at hand, Feuer said he believed the letters to the online suppliers would make an impact.

“That is a strategy that we think will yield results, and we’re optimistic about the path moving forward,” he said.

All of the online platforms have been cooperative, and hundreds of sale offers have been removed, he said. Some sites are using algorithms to detect listings; others, like OfferUp, have even expanded their workforce to manage the effort. Although fireworks are legal in some cities, items that are regulated or pose health or safety concerns are not allowed on the OfferUp platform, spokesman Brandon Vaughan said.

Feuer’s announcement Tuesday joins a long list of official attempts to rein in the use of fireworks. The LAPD and LAFD have both instituted public education campaigns to inform residents of the risks, they said. Penalties for selling or discharging fireworks in the city include a fine of up to $1,000 and six months in jail.

When public gatherings were limited by the COVID-19 pandemic, complaints of nightly explosions skyrocketed around the Fourth of July.

In addition to fires and injuries, fireworks pose a danger to pets. The days around the Fourth of July are the busiest of the year for L.A. Animal Services because so many pets get spooked by the noises and bolt, the agency said.

Military veterans, too, have described how the explosions can trigger traumatic battlefield memories.

The looming promise of another brutal season of wildfires has ratcheted up the need for action. California is experiencing extreme drought conditions that are lowering reservoir water levels and creating large swaths of bone-dry vegetation, which can act as fuel for hungry flames. A record-breaking heat wave last week only worsened the tinder-box conditions.

“The wildfire danger is ever-present,” said the LAFD’s Scott.

But just as Angelenos will always want to mess with the Hollywood sign, the illegal use of fireworks will never be fully suppressed, officials say.

“There is always going to be some demand for illegal fireworks here in our community,” Feuer said. “But if we can diminish the availability … we can, I think, take some meaningful steps toward reducing all the dangers that are associated with fireworks here.”