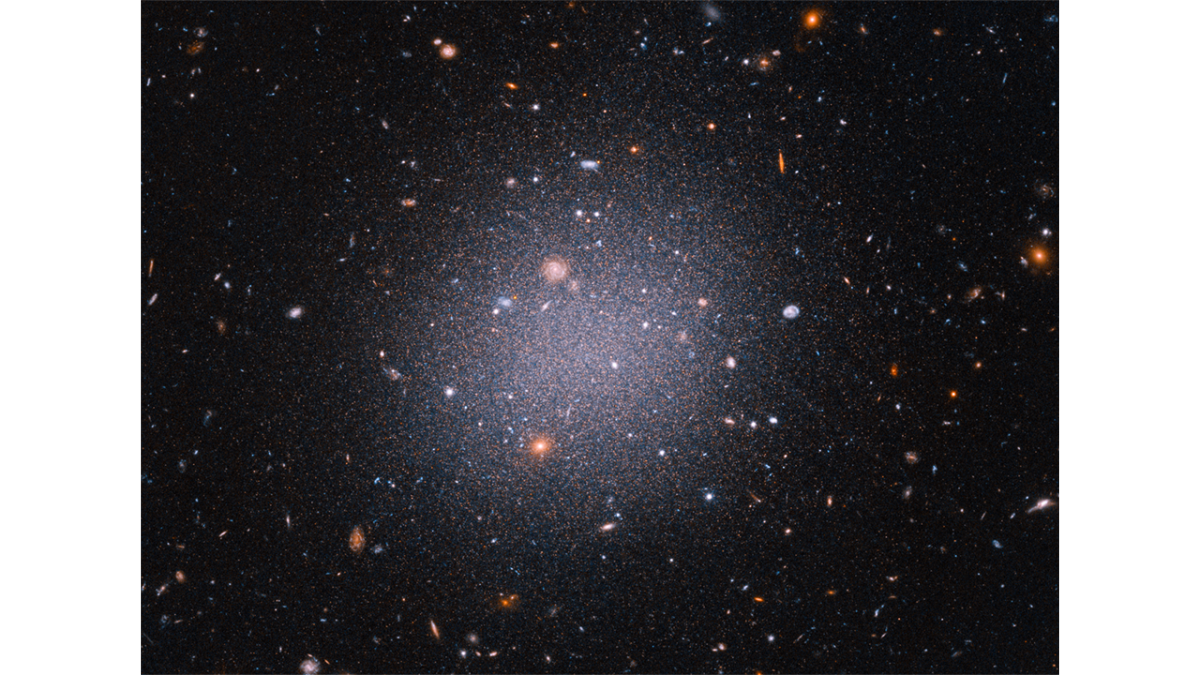 Astronomers may not know what dark matter is, but they do know that galaxies are supposed to contain a lot of the shadowy, invisible substance.

Dark matter makes up the lion’s share of a galaxy’s mass, and it’s critical to hold a galaxy’s stars, gas and dust together. So, when scientists find evidence twice over that a certain galaxy seems to have a tiny fraction of the dark matter it ought to have, astronomers sit up and pay attention. And that’s where recent observations with the venerable Hubble Space Telescope come in.

The galaxy in question, NGC 1052-DF2 (or, simply, “DF2”) is already quite different from our own. DF2 is as vast as the Milky Way, but it has no bright center, no spiral arms, no supermassive black hole at its heart, and less than one percent of the Milky Way’s stars. It’s what astronomers call an ultra-diffuse galaxy, held together so loosely that it’s almost see-through.

Scientists have spotted a fair number of ultra-diffuse galaxies, but few are quite like this one. Astronomers first suspected something was amiss with DF2 as early as 2018, when they peered at the galaxy using a number of different telescopes, including the Hubble Space Telescope. The researchers didn’t entirely know what to make of the strange galaxy, so in 2020, they used Hubble to take another, longer look.

“We went out on a limb with our initial Hubble observations of this galaxy in 2018,” Pieter van Dokkum, an astronomer at Yale University in Connecticut and lead author of new research about the strange galaxy, said in a statement. “I think people were right to question it because it’s such an unusual result. It would be nice if there were a simple explanation, like a wrong distance. But I think it’s more fun and more interesting if it actually is a weird galaxy.”

Specifically, the researchers wanted to check whether DF2 was closer to Earth than first thought, which would cause astronomers to underestimate the amount of dark matter in a galaxy. But the new measurements, which relied on the predictable brightness of aging red dwarfs at the galaxy’s edges, showed DF2 was actually farther away than first thought, 72 million light-years away instead of 65 million from the 2018 research.

The greater distance confirms the researchers’ initial suspicions that there is much less dark matter in the galaxy than expected.

In addition to DF2, the list of known dark-matter-deficient galaxies is only growing. For instance, much closer to DF2 lies another ultra-diffuse galaxy, DF4, which seems to share its neighbor’s dearth of dark matter. We aren’t sure how this might have happened, partly since we don’t really know how ultra-diffuse galaxies form.

But it’s possible something might have happened to both DF2 and DF4 as they evolved. And astronomers haven’t failed to notice the elephant in the galactic cluster: both galaxies live in a region dominated by the utterly massive galaxy NGC 1052.

The research is described in a paper published June 9 in The Astrophysical Journal Letters.