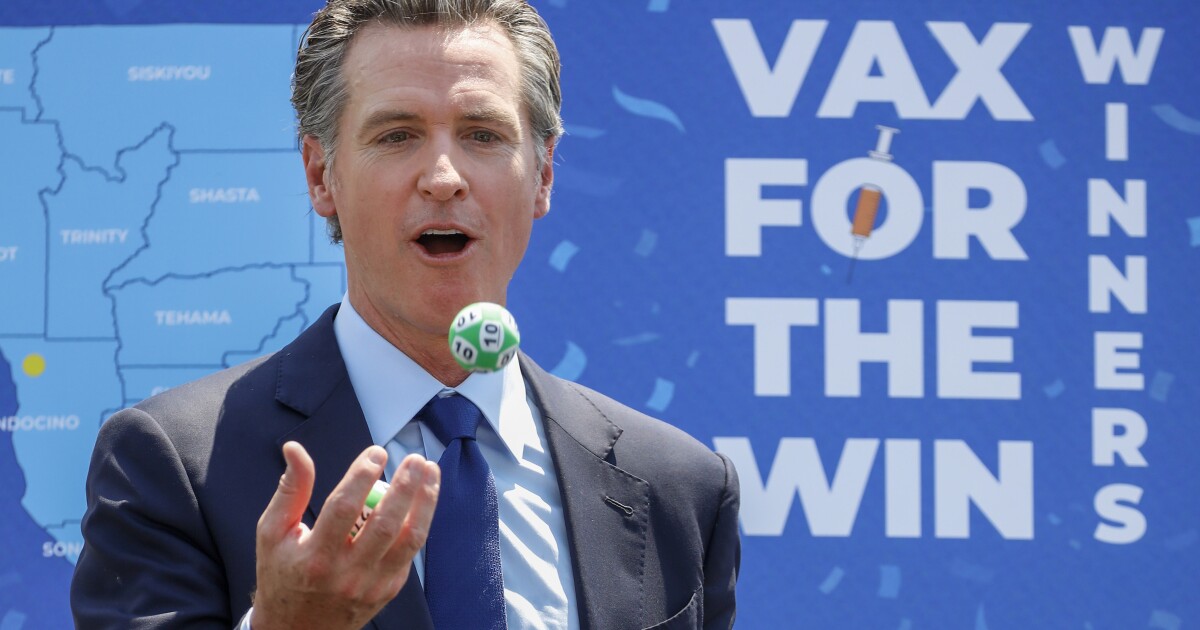 After a steep and sustained decline, California’s COVID-19 vaccination rate rose markedly earlier this month, outpacing the inoculation trends in much of the country, a Los Angeles Times data analysis shows.

The recent boost in vaccinations in the Golden State is a bright spot that comes as officials confirmed Tuesday that the nation probably will fall short of President Biden’s goal of administering at least one dose to 70% of U.S. adults by July 4. California is one of 16 states, along with the District of Columbia, that have reached that target, but it will take a few more weeks after the Fourth of July for the nation as a whole to meet the benchmark.

California has long been a leader in vaccinations. But the uptick in recent weeks offers an early suggestion that Gov. Gavin Newsom’s elaborate — and, in some corners, derided — program offering the chance at cash prizes to those who got vaccinated may have reaped some rewards.

While it’s impossible to say for certain why each individual resident decided to get inoculated, the timing is nevertheless striking, and some suggest the state’s $116.5-million incentive program probably sparked renewed interest in the shots.

“I guess the lottery is working,” UC San Francisco epidemiologist Dr. George Rutherford said at a recent online forum, adding later in an interview: “I think we have evidence that it’s had an impact.”

By the end of May and into early June, California’s average daily number of doses administered over a weekly period fell to a low of about 120,000, a precipitous plunge from a peak of more than 400,000 doses a day in early April.

In the face of this steep decline, the state tried a new tack to tempt those still on the fence: the prospect of cold, hard cash.

“You saw across the country a decline in [the] total number of people getting vaccinated. There were efforts in states large and small to stem that by doing incentives, cash prizes. California was no different,” Newsom said last week.

Newsom unveiled the details on May 27: In a series of drawings held through June, 30 Californians would win $50,000 apiece and 10 would take home grand prizes of $1.5 million each.

Two million $50 gift cards also were made available to residents who received their first dose starting the day the lottery was announced.

The spectacle hit peak California on June 15, when the grand prize winners were chosen at Universal Studios Hollywood while reporters, tourists and costumed movie characters such as Minions, Trolls, Shrek and Optimus Prime looked on.

Similar programs have been successful elsewhere. Ohio’s Vax-a-Million lottery program, which offered $1-million prizes and full-ride four-year college scholarships to vaccinated people, led to a 55% increase in vaccination rates among adults in their 20s, 30s and 40s in the days after the program was announced, the White House has said.

Some skeptics, though, have questioned the efficacy of, as well as the wisdom behind, such incentive programs.

Political opponents have also dismissed Newsom’s flashy giveaways as little more than attempts to either distract from his forthcoming recall election or shore up support at taxpayer expense.

But did it work?

The Times analyzed vaccination data from the U.S. Centers for Disease Control and Prevention to determine the average number of doses administered daily by California during the weeks of May 27 to June 2 and June 3 through June 9, then calculated the percentage change.

Only five states had a larger percentage increase in administered vaccinations from one time period to the next: Montana, Utah, Georgia, South Carolina and New Hampshire.

Comparatively, the average daily number of vaccinations nationwide increased during those two weeks by about 14%, according to The Times’ analysis.

For the most recent seven-day period in which vaccination numbers are relatively reliable, between June 6 and June 12, an average of 132,000 doses a day were being administered — a decline from the peak but still higher than it was at the end of May and in early June.

More recent numbers are not as reliable because it can take many days before the state receives information on all doses administered for a recent date.

So far, the trendline in California’s vaccination pace has resembled one of the theme park’s famed roller coasters. There was a steady rise from mid-December through the early part of April, followed by a nosedive.

Aside from the recent bump, the only other temporary reversal came around the time the statewide vaccine eligibility pool expanded to include residents as young as 12.

California has one of the highest vaccination rates in the nation, with 73% of adults — and 57% of residents of all ages — vaccinated with at least one dose, according to data compiled by The Times.

However, officials have long noted that progress is not uniform throughout the state.

In particular, substantial numbers of Latino and Black Californians remain unvaccinated. Only 41% of California’s Black and Latino residents are at least partially vaccinated, compared with 54% of Native American, 56% of white and 69% of Asian American and Pacific Islander residents.

Concerns have also been raised that low vaccination rates in parts of California’s rural north or the Central Valley may leave those areas vulnerable to future outbreaks.

But some experts say it’s also important to consider naturally acquired immunity in weighing the risk of future surges.

Testing of Californians in May for whether they have antibodies to the coronavirus — because of either vaccination or having survived an infection — found that 76.6% of state residents had such antibodies, according to analysis published by the state Department of Public Health.

Experts estimate that 70% to 85% of a population needs to have some degree of protection against the coronavirus for a region to achieve “herd immunity” or “community immunity,” in which a disease is effectively starved of opportunities to move from person to person, putting a lid on outbreaks and helping shield even those who are unvaccinated or have weakened immune systems.

However, others caution that it’s unclear how long someone who was previously infected remains immune. Government health officials have said that immunity from vaccinations is better and longer lasting than immunity from infection.

“For those people who have already been sick, that natural immunity will wane and they do need to come in and go ahead and get vaccinated,” Ferrer said. “So the numbers that we’re still watching are, in fact … what percent of our population has been vaccinated.”

Getting to that level, though, remains a tall order — one that officials acknowledge will probably entail individualized attention to holdouts.

But there’s always incentives. California is still offering the chance to win one of six vacation packages to destinations including Disneyland, a spa in Palm Springs, San Diego for surfing lessons, a Giants game in San Francisco and floor seats for a Lakers game.

Various other goodies — including free food and tickets to Six Flags parks — are also up for grabs.

“We’ll continue to promote incentives as long as they work,” Newsom said.