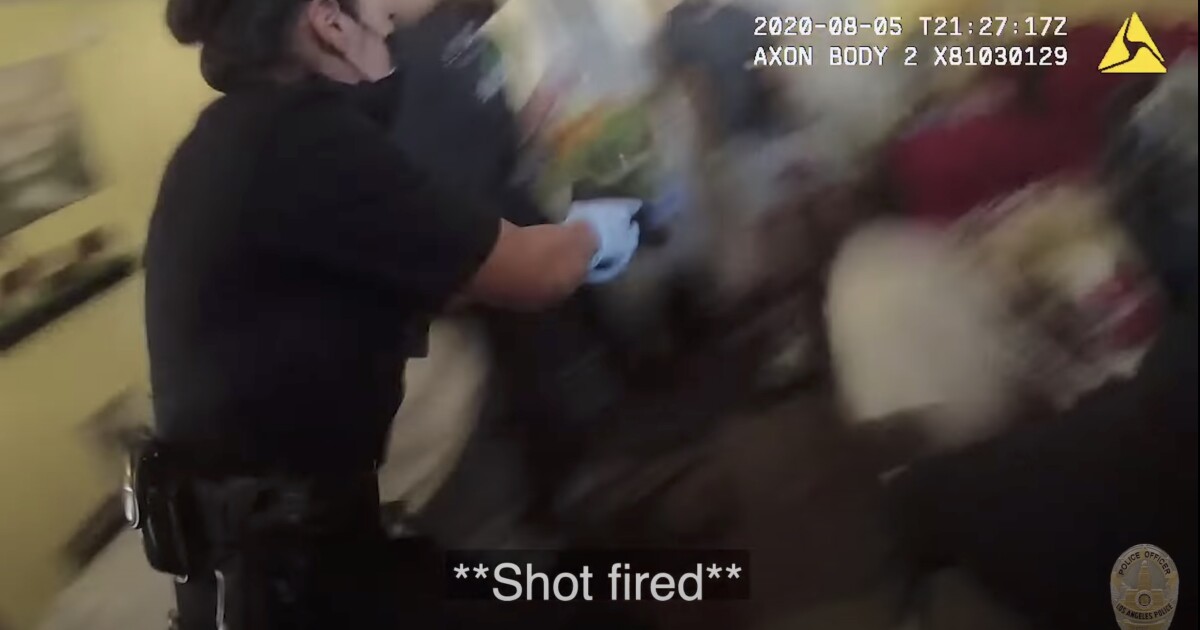 The Los Angeles Police Commission ruled Tuesday that poor tactical planning contributed to a chaotic scene last summer in Hollywood in which one LAPD officer was shot by another after spraying a fire extinguisher at a charging Rottweiler.

The July shooting, which the commission ruled was justified, occurred after a team of officers piled into the front room of an apartment in the 1100 block of North Wilton Place after receiving a call regarding a “male with a mental illness,” police said.

The man, later identified as 32-year-old Alfonso Mauldin, was armed with scissors and holding the Rottweiler on a leash, and had locked himself in a hallway. Children were barricaded in an adjacent bathroom.

In a report to the commission made public Tuesday, LAPD Chief Michel Moore wrote that Sgt. Jaime Flores determined that the situation warranted immediate action because of Mauldin’s proximity to the children.

Flores told investigators his top concern at the time was the safety of the children, and he believed he had enough officers on the scene to draw Mauldin out.

However, a use-of-force review board disagreed, finding that Flores should have called in the SWAT team and a mental evaluation unit and should have done a better job communicating a clear tactical plan to the officers when he decided they should enter the apartment.

The board found, and Moore concurred, that Flores’ “lack of tactical planning and lack of communication with the officers” amounted to a “substantial deviation, without justification, from approved department policy” — warranting administrative disapproval.

The board and Moore also found that Officer William Wheat had deviated from policy when he tried to kick open the hallway door while holding his service weapon in his hand.

However, the board, Moore and the commission all determined that the officers had followed policy and acted reasonably when two fired live rounds and another fired a beanbag round in a room that was crowded with fellow cops and rapidly filling with thick, white smoke that obscured their view.

The chaos, captured on video, began when one of the officers repeatedly attempted to kick in the hallway door; Mauldin then opened the door and rushed out while unleashing his dog.

“Get ’em,” the officers recalled Mauldin saying to the dog.

Wheat fired one shot at the dog. Officer Jessica Solis, across the room, fired three shots as Mauldin and the dog rushed forward and Mauldin leaped directly into her.

The first two shots were aimed downward, toward the dog. Officials would later say the dog was injured, but it was unclear if it was shot. It was taken to a veterinarian.

Solis’ third shot, which she said she intended for Mauldin, who she believed was armed with scissors, instead struck Officer Cristal Munoz-Preciado, who was spraying the fire extinguisher, in the arm.

Mauldin, who was not shot in the incident, was taken into custody.

Investigators determined that Solis’ third shot was fired after she had “an impaired view of Mauldin due to the large white cloud of chemical powder emitted from the fire extinguisher.”

Still, the commission, during a closed-door portion of its virtual meeting Tuesday, concurred with a determination by Moore that the shooting was justified based on the threat posed by Mauldin.

In his report to the commission, Moore defended not only the shooting but also the use of the fire extinguisher as a “tool during dog encounters.”

“Generally, a CO2 fire extinguisher has been found to be an effective deterrent when sprayed directly at the dog’s face and should be considered a useful tool,” Moore wrote, echoing the department’s written tactical directive on dog encounters. “The Department will continue to evaluate best practices, ensuring consistent and effective protocols for the deployment of fire extinguishers as a tool during dog encounters.”

L.A. city attorney to crack down on online fireworks sales