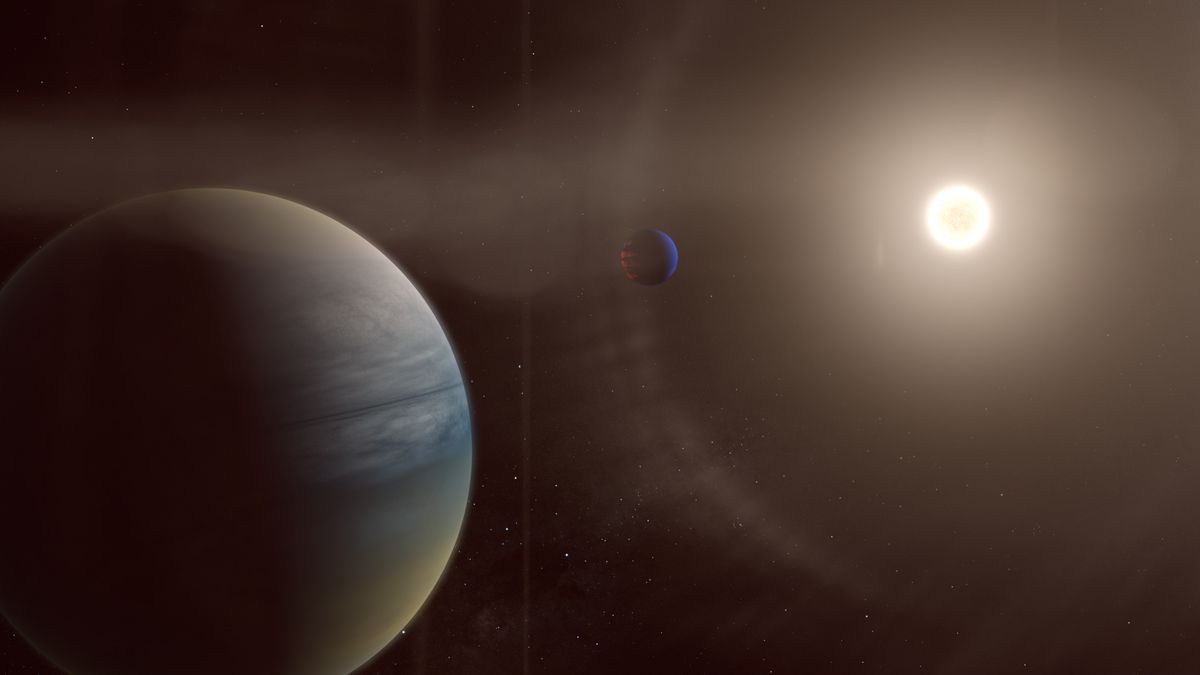 A pair of gas-giant exoplanets was found orbiting a distant sun-like star, thanks to the help of citizen scientists around the world.

Members of the NASA-funded Planet Hunters Transiting Exoplanet Survey Satellite (TESS) project discovered the two planets around a distant star called HD 152843, which is located about 352 light-years from Earth. The star has a mass similar to that of the sun but is nearly 1.5 times bigger and slightly brighter, according to a NASA statement.

The inner planet, named HD 152843b, is about 3.4 times bigger than Earth, or about the size of Neptune, and completes an orbit around its star in about 12 days. The outer planet, named HD 152843c, is about 5.8 times bigger than Earth and 27.5 times more massive, making it a sub-Saturn, or a planet between the size of Neptune and Saturn. Its orbital period is somewhere between 19 and 35 days, according to a new study.

“Studying them together, both of them at the same time, is really interesting to constrain theories of how planets both form and evolve over time,” Nora Eisner, lead author of the study and a doctoral student in astrophysics at the University of Oxford in the United Kingdom, said in the statement from NASA.

Citizen scientists with the Planet Hunters TESS project, which is operated through the Zooniverse website, detected three distinct transit events — a brief dip in a star’s brightness when a planet crosses the star’s face, blocking some of its light — in one month of observational data from HD 152843.

Their findings were then confirmed by professional astronomers who compared the data to computer models, which suggest two of the transit events came from the inner planet (HD 152843b) while the third transit came from a second, outer planet (HD 152843c), according to the statement.

Astronomers also used two additional instruments — the High Accuracy Radial velocity Planet Searcher for the Northern hemisphere at the Telescopio Nazionale Galileo in Spain and the Extreme Precision Spectrometer at Lowell Observatory in Arizona — to confirm the transit events were in fact caused by exoplanets, and not other sources, such as another stellar companion, passing asteroids or the movements of TESS itself. These instruments use a technique called radial velocity to detect tiny “wobbles” an orbiting planet induces in its parent star’s motion toward or away from Earth.

Observations of the HD 152843 system suggest that the exoplanets are far too hot and gaseous to support life as we know it on Earth. However, studying the two new exoplanets helps scientists learn about the range of possible planets in our galaxy, according to the statement.

“We’re taking baby steps towards the direction of finding an Earth-like planet and studying its atmosphere, and continue to push the boundaries of what we can see,” Eisner said in the statement.

Citizen-science projects, like the Planet Hunters TESS project, have aided in the discovery of numerous exoplanet candidates that may have otherwise remained undetected. The citizen scientists who helped identify HD 152843b and HD 152843c were listed as co-authors of the new study, which was published June 8 in the journal Monthly Notices of the Royal Astronomical Society.

“I feel that I’m contributing, even if it’s only like a small part,” Cesar Rubio, one of the citizen scientists and a machinist in California, said in the statement. “Especially scientific research; it’s satisfying for me.”

Russia Says It Fired Warning Shots at a U.K. Warship Near Crimea