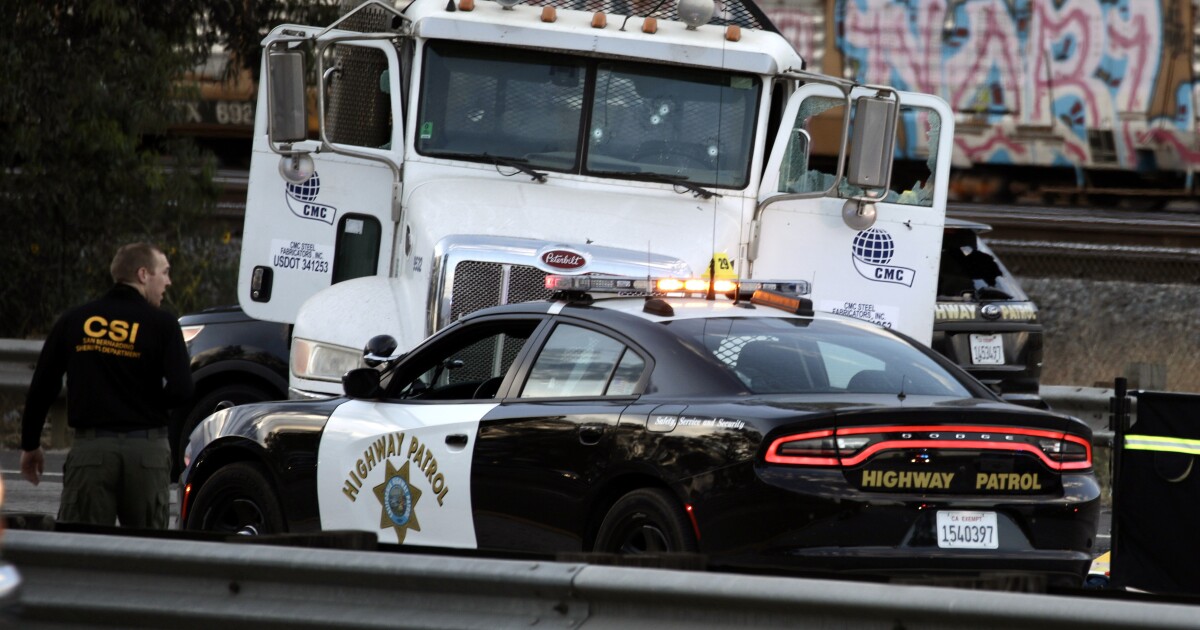 A man was fatally shot by an officer, another was in custody and the eastbound 10 Freeway was closed after a police pursuit ended in gunfire early Wednesday, officials said.

The chase began shortly before midnight Tuesday, when officers with the San Bernardino Police Department advised the California Highway Patrol that a big rig was traveling the wrong way on the 210 Freeway, according to Officer Ramon Duran of the CHP Inland Division.

The big rig had been reported stolen from the 5400 block of West Industrial Parkway about an hour earlier, said Sgt. John Echevarria of the San Bernardino Police Department.

A San Bernardino County Sheriff’s Department helicopter moved into place overhead as CHP officers pursued the truck, which exited onto surface streets before entering the 10 Freeway, again traveling in the wrong direction — west on the eastbound lanes, Duran said.

“Obviously, there were multiple vehicles and near misses,” Duran said.

Officers intercepted the truck on the 10 Freeway near Sierra Avenue, and a CHP officer shot and killed the driver at around 1 a.m. Duran could not confirm whether the driver also fired. No shots were fired from the helicopter, he said.

Video footage of the scene captured by OnScene.TV showed the truck sprawled across multiple lanes with what appeared to be bullet holes in the windshield. At least one tire had come off onto the road.

The driver, described only as an adult male, was pronounced dead at the scene. A passenger in the vehicle, also an adult male, was treated for minor injuries — possibly from debris from broken glass, Duran said — at a nearby hospital before being taken into custody.

Both sides of the freeway were closed for several hours, according to the CHP. The westbound lanes reopened around 5:40 a.m., but all eastbound lanes were still closed as of about 8:15 a.m.

Eastbound drivers will be rerouted onto Sierra Avenue until at least 11 a.m., Duran said.