Aliens could have spotted Earth cross the sun from more than 1,700 star systems 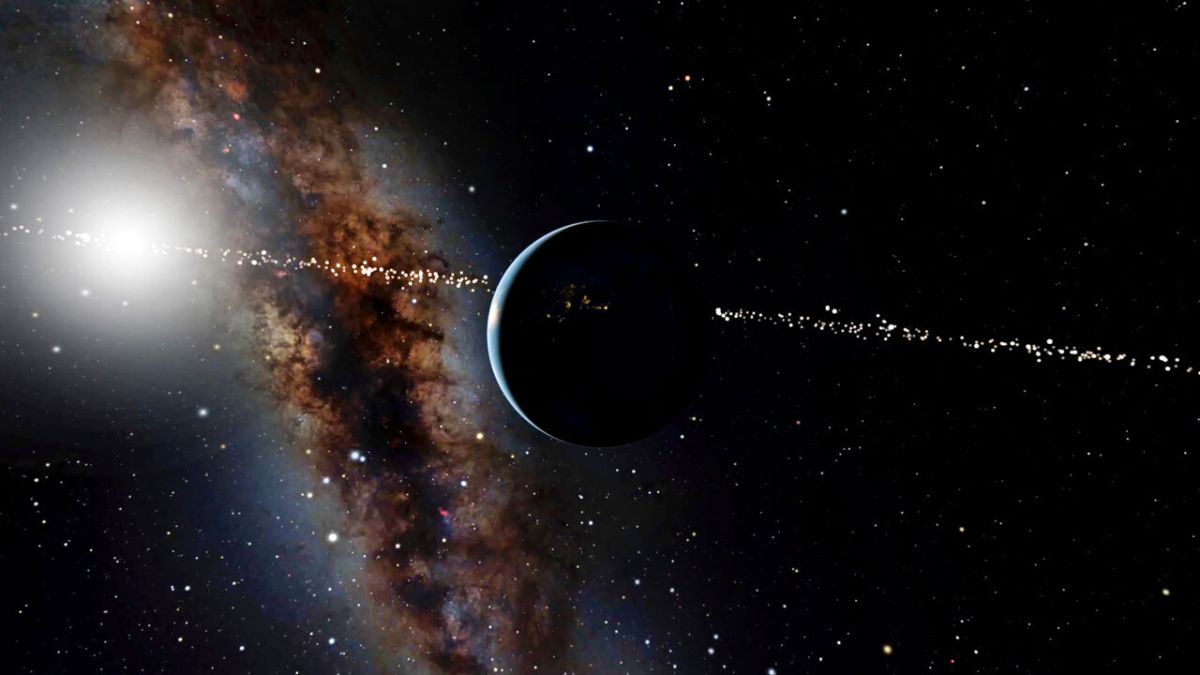 In the past 5,000 years, more than 1,700 nearby stars could have seen Earth and potentially detected life here, and four of those stars are known to possess rocky planets of their own, a new study finds.

When astronomers hunt for exoplanets, the most productive strategy to date is to look for worlds that “transit,” or cross in front of, their stars. “Seventy percent of all known exoplanets have been found by transits so far,” study lead author Lisa Kaltenegger, an astrophysicist and director of the Carl Sagan Institute at Cornell University in Ithaca, New York, told Space.com.

This fact led Kaltenegger to speculate what stars could see Earth. Last year she and her colleagues identified more than 1,000 nearby stars that could currently see the pale blue dot of Earth cross in front of the sun. But then she began to wonder how vantage points of Earth might change over time.

“I was wondering how long that front-row seat to find Earth through the dip in brightness of the star lasts,” Kaltenegger said. “The cosmos is dynamic, so a vantage point is not forever — it is gained and lost.”

To see which nearby stars could have seen Earth pass in front of the sun in the past or might do so in the future, the scientists analyzed the European Space Agency’s Gaia database. The observations from the mission, which launched in 2013 and continues today, include a map of the positions and motions of more than 331,000 stars within about 325 light-years of the sun.

“Our solar neighborhood is a dynamic place where stars enter and exit that perfect vantage point to see Earth transit the sun at a rapid pace,” study co-author Jackie Faherty, an astrophysicist and senior scientist at the American Museum of Natural History, said in a statement. “Gaia has provided us with a precise map of the Milky Way galaxy, allowing us to look backward and forward in time, and to see where stars had been located and where they are going.”

The researchers identified 1,715 stars that could have spotted Earth transits since about 5,000 years ago, which is about when civilizations began to bloom on Earth. Although 313 of these can no longer see Earth cross in front of the sun, 1,402 still can. Moreover, another 319 should enter this “Earth transit zone” in the next 5,000 years.

Of those 2,034 total stars in the 10,000-year span examined, the scientists found that 75 lay within 100 light-years of Earth, close enough for human-made radio waves to have swept over the star, since commercial radio stations on Earth began broadcasts about a century ago.

Previous research found that rocky planets are not only common in the Milky Way, but often lie in the habitable or “Goldilocks” zones, where a planet can retain liquid water on its surface. Based off this prior work, the researchers estimated that 29 of these 75 stars may possess rocky worlds in their habitable zones.

Seven of the 2,034 stars are known hosts of exoplanets that have had or will have the chance to detect Earth just as Earth’s scientists have detected them. Three of these seven exoplanetary systems — K2-65, K2-155 and K2-240 — can currently see Earth.

“Who knows if life evolved there too, but if it did, and it had a similar technology level that we have, then such nominal alien observers could have spotted or will spot life on our own world,” Kaltenegger said. “If someone had found us already I wonder what they would think about us?”

Three of these seven exoplanetary systems — Teegarden’s star, GJ 9066 and Trappist-1 — will be able to spot Earth in the coming decades and centuries. Moreover, they will be close enough to detect our radio waves. Intriguingly, the Trappist-1 system, which is about 45 light-years from Earth, is home to seven Earth-size planets, four of them in the habitable zone. Trappist-1 will enter the Earth transit zone in 1,642 years and remain there for 2,371 years.

One of the seven exoplanetary systems, Ross 128, could have seen Earth transit the sun for 2,158 years, starting about 3,057 years ago and ending about 900 years ago. This stellar system includes a red dwarf host star located about 11 light-years away from Earth in the Virgo constellation and is the second-closest planetary system with an Earth-size exoplanet, which is about 1.8 times the size of our planet. But any observers in the Ross 128 system would have missed the chance to detect any of our radio waves. “Would anyone there have concluded that there was intelligent life on Earth 900 years ago?” Kaltenegger wondered.

Ideally, Kaltenegger would like to see which exoplanets could have seen Earth as far back as 2 billion years ago, “when Earth’s atmosphere was first transformed due to life — the big oxidation event. Because that is how long anyone looking at Earth could have figured out that there is life on our beautiful pale blue planet.” Unfortunately, the Gaia database is not precise enough to allow scientists “to go that far back in time,” she noted.

The scientists noted that the ability to see Earth transiting the sun also provides the chance to analyze light streaming through Earth’s atmosphere to detect potential chemical signs of life, such as oxygen. This technique is one of the ways that the James Webb Space Telescope, expected to launch later this year, is set to analyze several transiting exoplanets to look for hints of life there. “We are right now on the threshold of finding life in the cosmos,” Kaltenegger said.

Perhaps anyone seeing Earth from a distant star might want a closer look at our planet. For instance, the $100 million Breakthrough Starshot project aims to launch microchip-size spacecraft at the closest exoplanet detected around Proxima Centauri 4.2 light-years from Earth to better study that world.

“One might imagine that worlds beyond Earth that have already detected us, are making the same plans for our planet and solar system,” Faherty said in a statement.

In the future, NASA’s Transiting Exoplanet Survey Satellite (TESS) and other telescopes will look for exoplanets around the 2,034 stars the researchers identified, “hopefully many in the habitable zone,” Kaltenegger said. “Once someone finds such planets, then my team will model them and, assuming they have life, figure out how much time the James Webb Space Telescope would need to find it, and apply for that time.”

Kaltenegger and Faherty detailed their findings online June 23 in the journal Nature.

China’s Tiangong space station: what it is, what it’s for, and how to see it