Will the LAX train project jump-start the L.A. rail system? 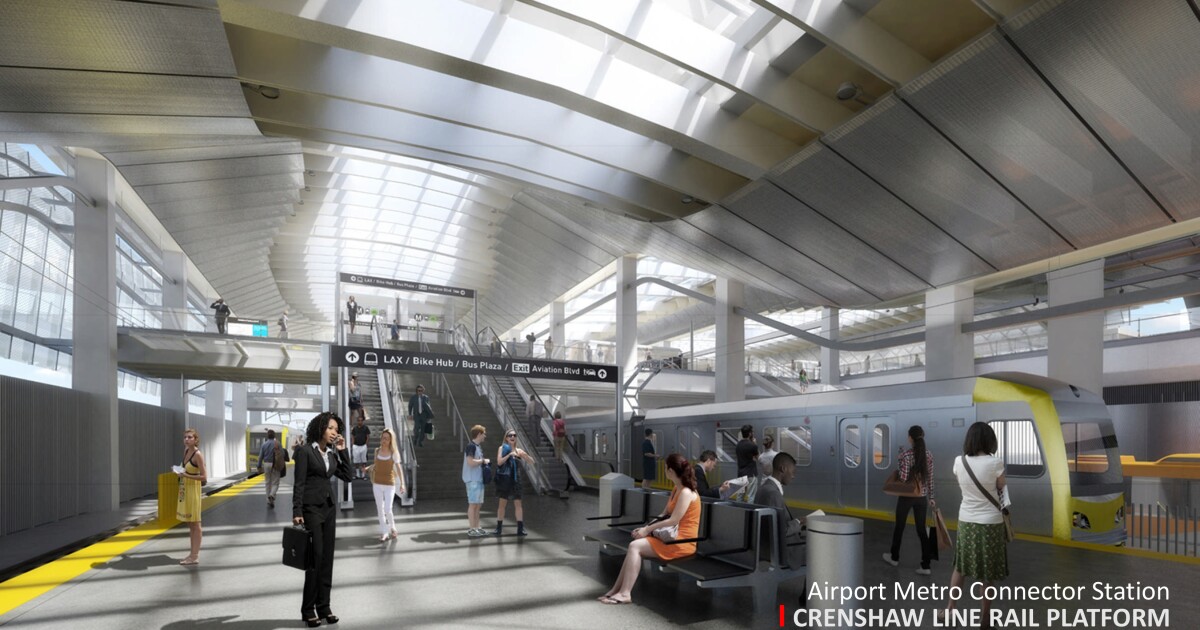 Of the many indignities of getting around in Los Angeles, this has always stood out: Unlike people in the vast majority of big cities worldwide, L.A. residents and travellers still can’t use rail to get to and from the airport.

The deficiency has become even more glaring as traffic congestion has worsened and Los Angeles County has spent billions to push rail lines into locations such as Azusa, East Los Angeles, Santa Monica and Redondo Beach — but not to Los Angeles International Airport.

That all changed Monday, when officials gathered on the outskirts of the airport to break ground on a $900-million Airport Metro Connector project that by 2024 will link the county’s fast-growing rail network to a people mover system being built at LAX.

The project is designed to be up and running in time for the 2028 Olympics. But more important, some officials see it as a potential turning point in L.A.’s ambitious, expensive efforts to make mass transit a serious alternative in a city known for its cars.

The Airport Metro Connector will join several huge rail projects under construction, including a subway to Santa Monica, another through downtown L.A. as well as new lines in southwest L.A. and the San Gabriel Valley. Despite the rise of rail over the last few decades, passenger growth has been slow. Many hope a connection to the airport could jump-start the effort.

“I think we’ve got all the right ingredients to bring people back,” Mayor Eric Garcetti said Monday. “New lines, or extended lines, is the key to that. It has to get you to where you want to go.”

Getting to and from LAX has long been a trying and expensive proposition to many, and helped fuel an industry serving travelers, whether it be taxis and ride-hailing or shuttles and luxury black cars. At the airport Monday, many passengers said a rail line could be a game changer.

“So many airports have [transit], I don’t know why we don’t,” said Cristina Wood, 59, a Santa Barbara resident who was waiting to check in for a flight to Ghana.

Wood said she has had great experiences using transit and people movers at other major airports, including Hartsfield-Jackson in Atlanta, and she would be glad to use a similar system in Los Angeles.

“I don’t know that I would take buses, but a train would be amazing,” she said.

The Airport Metro Connector project will serve as the ninth station along the Crenshaw/LAX line, and will connect to the airport’s under-construction people mover to deliver passengers directly to their terminal.

Residents and visitors in Los Angeles have long bemoaned the city’s lack of a direct rail connection to LAX, the second-busiest airport in the nation. One 2018 study of transit access at U.S. airports ranked it near the bottom.

The Los Angeles County Transportation Commission first looked at a study to bring a Metro line to the airport in 1988, officials said Monday. At the time, the airport director didn’t want to lose the parking revenue.

As the years went on, it became increasingly apparent that L.A. was falling behind, with the Green Line earning the dubious nickname “the train to nowhere” because it brings riders close to — but not actually into — the airport. It now ends abruptly in a sleepy section of Redondo Beach.

Genevieve Giuliano, director of the transportation research center MeTrans at USC, said L.A.’s earlier rail plans made a “big mistake” by not connecting Metro to the airport. She couldn’t think of a single other major airport without direct transit access.

“LAX airport access has been something of an embarrassment, and I think the [connector] project will be quite favorably perceived,” she said. “It is a long overdue step in building a functional transit network in L.A.”

Travelers at LAX on Monday described creative and at-times confounding methods of trekking to the terminal, including parking at a nearby Marriott and using the hotel’s free shuttle bus, or shelling out $35 a day for a park-and-ride service.

Many said they would be happy to use public transit if it were a viable option. Currently, the only way to use transit to get to the airport is to connect to a shuttle bus.

“If I had the choice, I would have absolutely jumped on that train today,” said Zeronica Wright, 54, who came to the airport in her car and parked in the Terminal 1 lot.

Jeremiah Butler, Derek Kariuki and Nico Clayton, all 21, were visiting from Kansas City, Kan., and said they had to return their rental car at 9:30 a.m. even though their flight wasn’t until 7:30 at night. They were waiting out the hours on the floor of the airport.

“I definitely would have used the subway if that was an option,” Butler said. “Now we’re here all day.”

But it remains to be seen whether the new station will actually move the needle in terms of ridership — which has made a comeback since its 70% drop last year, but is not yet back to pre-pandemic levels — and in terms of public perception.

“Few people are inclined to haul their luggage on the Green Line, then a shuttle to get to or from the airport,” Giuliano said. “Therefore, using public transit for access to the airport never caught on.”

Along with access to Metro light rail trains, the new Airport Metro Connector station will include a 16-bay bus plaza, a bike hub and a private vehicle drop-off zone. The LAX people mover will be available every two minutes during peak hours, according to airport governing body LAWA, and will transport an estimated 30 million passengers a year.

Monday’s groundbreaking came after years of debate, complaints and conversation. Previously aborted rail plans included a bullet train from LAX to Las Vegas and a link from LAX to the San Fernando Valley.

Approval for the connector station came in 2014. In May, the Metro board approved an $898-million budget for the project, funded in part by tax Measures R and M.

“This is like the missing piece,” Garcetti said Monday. “This [connection] has been, for so long, the gap in the system. And it’s been emblematic of what we failed to do — failed to do at the airport, and failed to do in the Metro system.”

But Garcetti would not go so far as to call it a silver bullet for lagging transit ridership.

“It won’t singularly redefine the system — that’s the frustrating thing,” he said. “L.A. is so big, and we keep waiting for the one thing, whether it’s the Purple Line or this. It’s all of those things.”

Airport numbers also took a huge hit during the pandemic, but they appear to be bouncing back more quickly than transit.

On Sunday, TSA screened about 85,600 passengers, LAX spokeswoman Stephanie Sampson said — the most since the start of the pandemic, and about 64% of 2019 numbers.

By comparison, weekday rail and bus ridership has been at about 55% of pre-pandemic levels, according to Metro. Part of that lag is due to changing commutes brought about by the pandemic, which has seen a huge portion of the workforce transition to working from home.

Metro Chief Executive Stephanie Wiggins on Monday said office life isn’t the only sector the agency is banking on, and that Metro’s major projects are also working to serve people engaged in travel and leisure.

“The pandemic, among other things, has given us an opportunity to rethink the value and the service that we provide to residents and visitors,” she said. “While I think a portion of remote work is here to stay, it means that Metro really has the opportunity to … be integrated into the Southern California lifestyle.”

Wiggins cited the airport connector, as well as plans to connect to SoFi Stadium and to other cultural touchstones such as museums and concert halls, as part of Metro’s effort for revitalization. She also noted that opting to use transit has other benefits that may appeal to riders in a post-COVID-19 world, including reducing the effects of climate change.

Although ridership is still making a return, the pandemic may make a lasting change, she added.

“I think our tolerance level for being stuck in traffic is going to be much lower than it was pre-pandemic,” Wiggins said. “And we want [people], when they’re looking for that alternative, to know about the Airport Metro Connector, but also to give Metro another look.”

The 2028 Olympics are also a major driving factor for the completion of L.A. transit projects.

Gov. Gavin Newsom in May offered as much as $1 billion in state funds to help support the county’s construction blitz, which also includes a Westside subway extension and a light rail line in South Los Angeles. The projects are part of Metro’s “28 by ’28” effort to complete an array of transit projects before the Summer Games.

Officials said the people mover was among the projects fast-tracked during the pandemic, and that it will probably be finished by 2023.

Giuliano, of USC, said while the connector station will do a lot for airport traffic, it probably won’t have much effect on transit ridership overall.

“The vast majority of travel is not trips to and from the airport, so for everyday travel we shouldn’t expect much impact,” she said.

But, she noted, “many visitors would like nothing more than to avoid driving in L.A.,” and many who have not experienced eight-lane freeways before can find them terrifying.

“This project will give reasonable options for getting to downtown or the Westside,” she said. “With a good communications and marketing campaign, we can make it a lot easier for visitors to enjoy L.A. without the rental car.”

Calling it “the front door to the airport,” L.A. City Councilman and Metro board member Mike Bonin said the new station will be the biggest light rail platform in the Metro system.

“This groundbreaking is a pivotal milestone in our effort to give residents and visitors alike real alternatives to sitting in traffic,” he said.