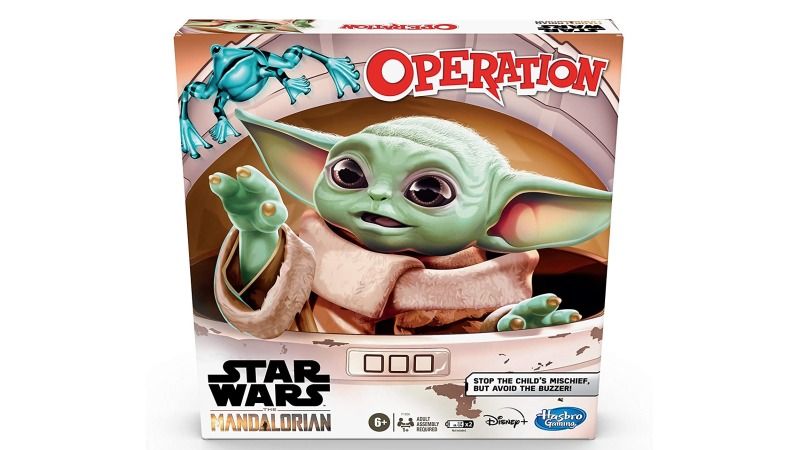 Fans of “Star Wars” can get their Baby Yoda fix with two Mandalorian-themed board games from Hasbro Gaming, priced at almost 50% off each for Amazon Prime Day.

The games allow you to play with (or rescue) Grogu, more commonly known as “Baby Yoda,” the animated child star of the Disney Plus hit series “The Mandalorian.” Each of the board games is a variation on old classics that the adults in the family likely played when they were kids, allowing for an easy entry for any players in the household.

The first of these games is a twist on “Operation,” available now for 46% off for Prime Day. Kids aged six and up can use tweezers to pick up objects inside the game unit, but they have to avoid the sides of each container — or they will set off a buzzer. Meanwhile, they’ll need to contend with the ever-curious Grogu, who will be trying to swipe objects during gameplay.

This special Baby Yoda-themed edition of “Operation” is 46% off for Prime Day. Players need to race to remove objects from openings in the game, while The Child tries to seize frogs, eggs, broth or other items by himself.View Deal

The second game, a variation on “Trouble,” is 47% off for Prime Day.

Choose to play as your favorite character (such as The Mandalorian or Cara Dune) and race around the board to rescue The Child on a dangerous planet. Just like the older versions of “Trouble,” a popping die roller will help to determine your character’s fate during their travels.

This Baby Yoda-themed edition of “Trouble” has up to four players racing to rescue The Child on a strange planet. It’s nearly 50% off for Prime Day and allows you to play as characters such as IG-11, Kuiil or The Mandalorian himself.

Whatever option you choose, these games will allow kids (and big kids) to enjoy “The Mandalorian” in a new way, while anxiously waiting for Season 3 to drop on Disney Plus sometime in 2022.

There are lots of other “Star Wars” deals ongoing for Prime Day, which ends Tuesday (June 22). Some other options to consider include this Baby Yoda-themed Amazon Echo Dot stand (at 35% off), or this “Star Wars”-themed Amazon Fire TV stick to stream all your movies and TV shows (at 32% off). You can also view the best Lego “Star Wars” sets for Prime Day, including some with the elder Yoda.