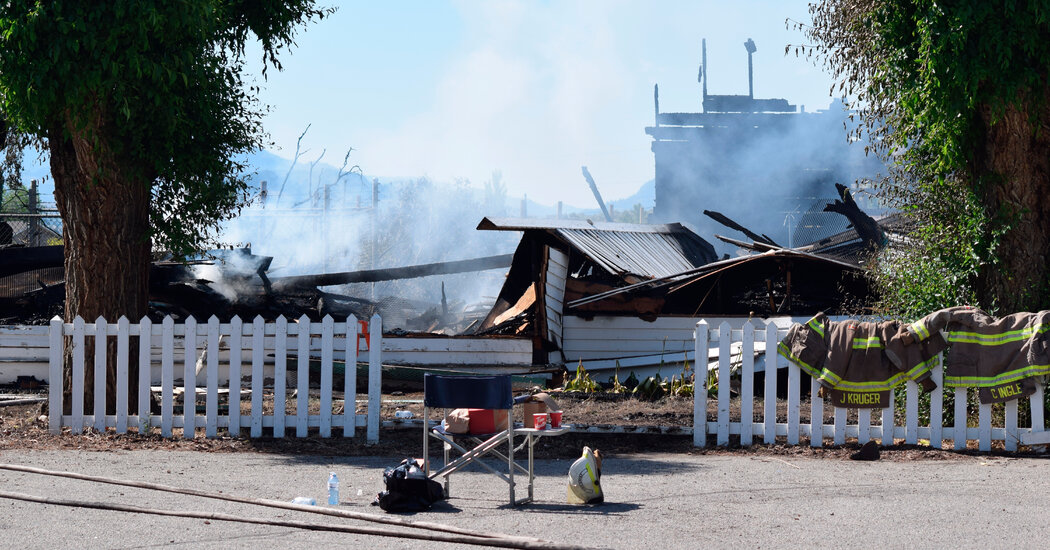 MONTREAL — National Canadian police were investigating on Tuesday after two century-old Catholic churches burned to the ground within hours of one another on Indigenous lands in British Columbia.

Indigenous leaders said they were particularly disturbed by the timing of the fires, which took place on National Indigenous Peoples Day, which celebrates Indigenous culture. The fires come at a particularly raw moment, just weeks after the unmarked graves of 215 children were found near a former church-run school in British Columbia.

While the circumstances remained murky, investigators said one line of inquiry was arson, including the possibility that the Indigenous communities had been targeted.

Investigators said another possible motive was anger at the Roman Catholic Church. The two churches are about 120 miles from the Kamloops Indian Residential School, where the children’s graves were discovered on the grounds in May.

From 1883 until the 1996, an estimated 150,000 Indigenous children were sent to church-run residential schools, where their culture was forcibly suppressed in a program the Truth and Reconciliation Commission in 2015 called “cultural genocide.”

Word of the fires — at Sacred Heart Church on Penticton Indian Band territory and St. Gregory’s Church on territory belonging to the Osoyoos Indian Band — reverberated across Canada at a time when the mistreatment of Indigenous peoples has gripped the consciousness of the country.

Indigenous leaders on Tuesday expressed shock, disbelief and anger at the churches’ destruction.

The chief of the Penticton Indian Band, Greg Gabriel, stressed that the motive for the fires remained a mystery. He said his community had “mixed feelings” over the burning of Sacred Heart Church on its land, given the history of the Roman Catholic Church in subjugating the Indigenous people, a record made more painful by the discovery in Kamloops.

But Chief Gabriel said some in the community were also upset that a place of worship, comfort and sanctuary, one that had been an integral part of the community’s social fabric for 110 years, had been burned to the ground.

“There’s a lot of anger and hurt in our community, from the residential school survivors and elders,” Chief Gabriel said, stressing that any act of arson was unacceptable if it turned out that the fires were deliberate. “A lot of families, including my own, had events like funerals, marriages and baptisms in that church. Elders were attached to the church and some feel hurt by its loss.”

He added that video footage had shown a vehicle leaving the scene.

Chief Clarence Louie of the Osoyoos Indian Band said his community was also ambivalent about the church. “I don’t believe in the church. I don’t believe in those symbols, but some of our people do,” Chief Louie said, adding that a handful of churchgoers live on the reserve. He said the fires, which had taken place at night, sounded like “vandalism.”

The surrounding Okanagan Valley is a stunningly picturesque area known for its sweeping vineyards and lakeside vacation areas. The region, which extends about 125 miles north from the border with Washington State, has produced one of Canada’s first Indigenous-owned wineries.

Sergeant Jason Bayda, a spokesman for the Royal Canadian Mounted Police in the region, said that while the area was known for its wildfires, acts of arson were very rare. He said that police were not speculating on the circumstances.

“I haven’t heard something like this happening here before,” he said. “We are sensitive to recent events,” he added, alluding to the discovery of the children’s unmarked graves.

He said the R.C.M.P. is investigating the fires, and had sent forensic investigators to comb the charred remains of the churches.

Chief Graham said he suspected a liquid accelerant may have been used because of the burn patterns found on the ground. Both churches were old and made of wood, he said, and the level of destruction would make it more difficult to parse the evidence.

“The timing of the two fires is very suspicious,” Chief Graham said, adding that one line of inquiry is that the two fires are connected.

The Rev. Thomas Kakkaniyil, the pastor at St. Gregory’s, said the church on Sunday had celebrated its first Mass in over a year after being closed by Covid-19 restrictions. He said he believed the church was targeted by parties outside the Osoyoos Indian band.

Emma Anderson, a professor of religious studies at the University of Ottawa, said that burning down a church was a particularly visceral, symbolic and iconoclastic form of violence against the Roman Catholic Church, since churches and their relics embody the religion.

She added that, “despite its historic blunders and sins, the church has been a historic mainstay in the lives of some Indigenous people.”