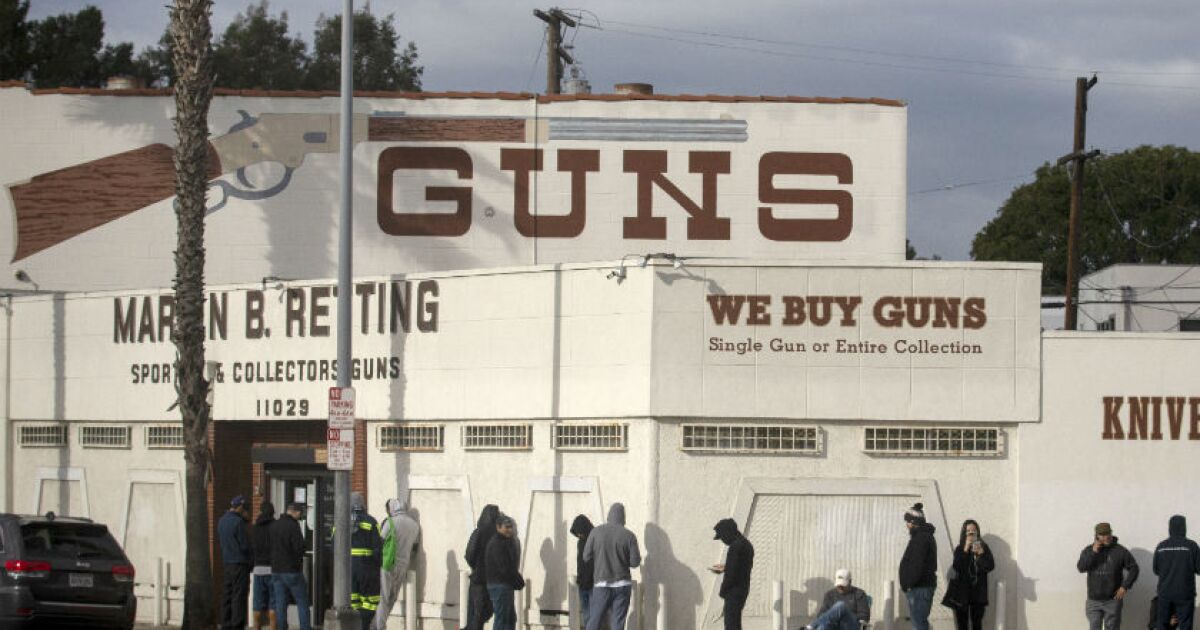 A federal appeals court grappled Tuesday with a key dispute that may determine the fate of several challenges to California gun laws.

An 11-member en banc panel of the U.S. 9th Circuit Court of Appeals considered a challenge to a voter-approved ban of large-capacity magazines with more than 10 rounds of ammunition.

The outcome in the case will help determine the fate of California’s 32-year-old law prohibiting military-style rifles deemed by the state to be assault weapons, which a district court struck down this month. California passed the ban after a shooter used an AK-47 and large-capacity magazines to kill five children in a Stockton school yard in 1989.

During Tuesday’s hearing, some Democratic appointees to the panel — seven of the 11 were appointed by Democratic presidents — cited evidence submitted by California that large-capacity magazines make mass shootings more deadly and particularly threaten law enforcement.

Judge Andrew Hurwitz, an Obama appointee, asked a lawyer for the gun lobby whether she agreed that there was “demonstrated evidence” that lives have been saved when killers in mass shootings had to stop to reload their guns. The state cited cases in which people had escaped or the gunman was apprehended while reloading.

Erin Murphy, representing the gun owners, replied that the evidence was “not conclusive.”

Samuel Siegel, a California deputy solicitor general, told the court that the state’s ban on high-capacity magazines imposed only a minimal burden on gun owners and did not take away an individual’s right to self-defense. Siegel repeatedly said no evidence exists of anyone needing to fire more than 10 shots in self-defense.

Judge Lawrence VanDyke, a Trump appointee, appeared to scoff at the claim. He said that someone could be threatened by a large group of people, which presumably would require more ammunition to fend off.

The decision in the high-capacity magazine case will probably determine the legal analysis, or standard of review, that must be used to decide whether a gun rule violates the 2nd Amendment. That analysis may affect whether California wins or loses its defense of its gun laws.

That challenge, Rupp vs. Bonta, failed at the district court level. Judge Josephine L. Staton, an Obama appointee who serves in Orange County, upheld the assault weapons ban in 2018. A hearing and written arguments in a gun group’s appeal in the 9th Circuit have been completed, but the court has put off a final decision until the high-capacity magazine challenge is resolved.

“There is a logjam of 2nd Amendment challenges that to one degree or another are dependent on each other,” said Chuck Michel, president of the California Rifle and Pistol Assn., which sponsored some of the challenges before the 9th Circuit.

That test usually involves a two-step process. First a court asks whether the law affects an activity protected by the 2nd Amendment. If so, the court then considers whether the government has provided sufficiently strong reasons for limiting that activity.

The gun lobby for years has tried to get the U.S. Supreme Court to decide in favor of a different analytical framework, and with a 6-3 conservative majority now on the high court, firearms proponents believe their chances of prevailing are better than ever.

Michel said that some Democratic appointees on Tuesday asked the state’s lawyer tough questions, and he was not optimistic that gun rights proponents would win.

“At the end of the day,” he said, “I think they will go the way you would predict based on their party affiliation.”

A 9th Circuit panel voted 2 to 1 to uphold Benitez’s decision in the magazine case, but the rest of the court voted to rehear the case en banc. A decision could come at any time.

Still, he said, the 9th Circuit has become harder to predict.

“Things in the 9th Circuit have changed a lot over the last four years,” Winkler said. “It used to be a reliably liberal court, but it is much more balanced now.”