Bonin: We’ll clear homeless camps from Venice boardwalk this summer, with no arrests 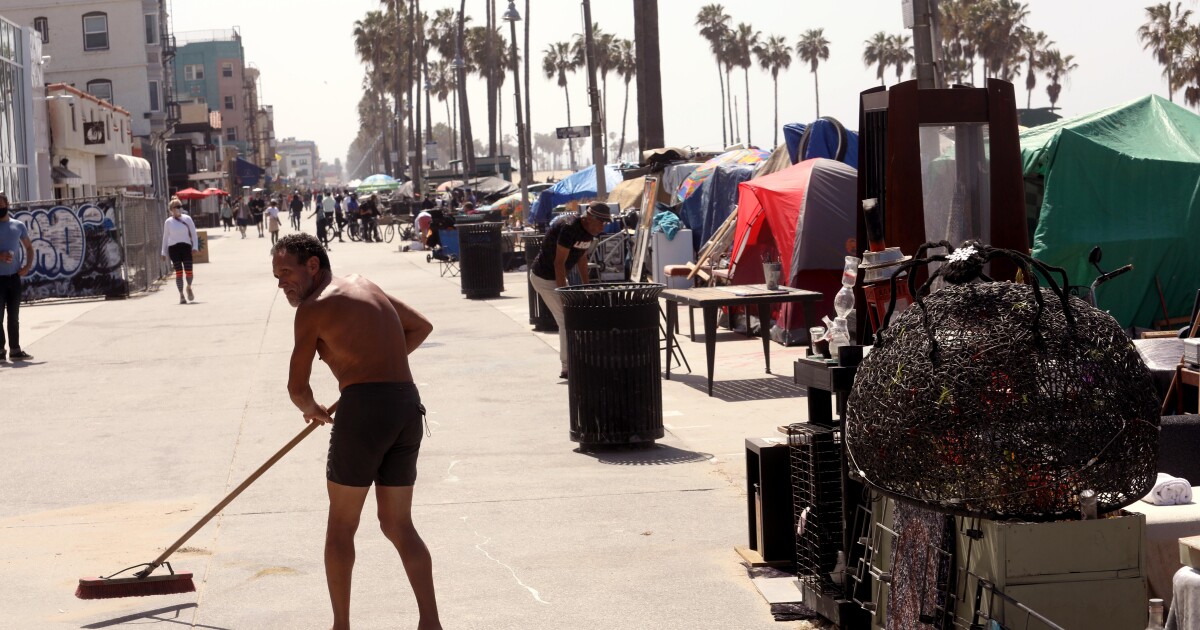 In a statement posted online, Bonin said housing and services will be offered starting Monday to relocate up to 200 people humanely, without threats of arrest or incarceration.

“The current situation is intolerable, and we must end it,” the statement said. “Nobody deserves to live, or die, on the street; and all Angelenos should be able to enjoy our neighborhoods, beaches, and parks. We can do better, and this program creates a model for bringing people together to house those in need and reopen our public spaces, using a humane and proven approach.”

Bonin did not specify where the housing would be but said his office had identified options including Project Homekey — hotels purchased by the city or county for homeless housing — as well as shared housing and permanent housing vouchers. Acknowledging that it can take time to secure leases with subsidies, he said provision has been made for stays of up to six months in motels, “the most commonly requested interim housing option.”

The statement largely reiterates a plan Bonin described in a recent interview with The Times, with the addition of the soft deadline. The plan parallels a proposal made by the resident group Venice Boardwalk Action Committee in January to clear the beachfront camps in phases.

That proposal focused on the boardwalk as a pilot program that would lead to subsequent clearance of homeless encampments in other parts of Venice. Bonin’s statement did not mention other encampments.

St. Joseph Center, the Venice-based social services agency, will lead the program with outreach teams concentrating on zones within the nearly mile-long row of tents and temporary shelters.

The city Bureau of Sanitation will clean each area once it is cleared.

The Los Angeles City Council is slated to vote Wednesday on a motion that would set aside $5 million to fund the work.

Bonin, who has criticized the heavy-handed policing that accompanied the March clearing of Echo Park Lake, said the Los Angeles Police Department is “aware and supportive” but will not be involved in the housing effort.

In his statement, Bonin also railed against the recent actions of Sheriff Alex Villanueva, who has dispatched deputies to the boardwalk and criticized elected officials about the state of homelessness in places such as Venice. Sheriff’s deputies in recent weeks have became a regular presence on the boardwalk, frustrating Bonin and other homeless activists who say they are not helping the situation.

Their “lack of familiarity with Venice and available services has been disruptive to outreach efforts,” Bonin said. “The sheriff’s rhetoric and approach are damaging, as is the criminalization of homelessness. It leads to re-traumatization, breaks crucial connections with service providers.”

Villanueva shot back with a statement calling Bonin’s plan a “too little too late PR campaign devoid of substance and, most tellingly, yet again refusing to regulate public space.”

In an interview earlier this month, Los Angeles Homeless Services Authority Executive Director Heidi Marston said her agency was working closely with Bonin’s office and various service providers to help people leave the boardwalk. She said LAHSA had heard nothing from the Sheriff’s Department about its plans or work in Venice.

She added that one of the most persistent problems in Venice is identifying enough interim housing options. The $5 million that the City Council is considering will go a long way to helping toward creating more spaces in motels and hotels until more permanent solutions can be found, she said.

“We’re seeing more and more that, for people, moving into a hotel or a motel is preferable [to congregate shelters],” Marston said. “So we should be putting money into making that happen.”

Venice homeowner Mark Ryavec, who unsuccessfully challenged Bonin in 2017, dismissed the proposal as “tragically many years late and ultimately worthless” unless he allows the LAPD and Recreation and Parks Department to ticket or arrest anyone violating the city’s law against camping in public parks.