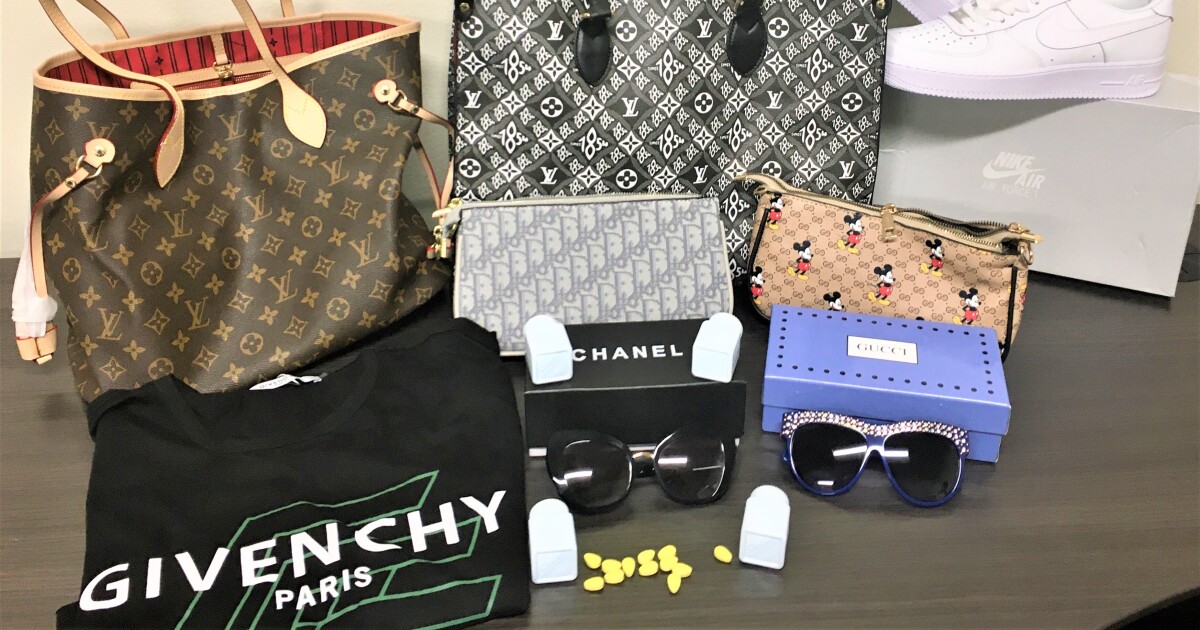 All of the goods arriving at the Port of Long Beach last month would have fetched a pretty penny — had any of them been real.

U.S. Customs and Border Protection seized a container holding a cache of 57,607 counterfeit goods that authorities estimate could have amounted to more than $12.7 million for the genuine retail value.

“One important aspect of CBP’s vast mission is to protect American consumers and industry from trade fraud,” Donald Kusser, the agency’s director for the ports of Los Angeles and Long Beach, said in a statement. “I am extremely proud of the work performed by CBP officers at the Los Angeles/Long Beach seaport to prevent illicit goods from entering the United States.”

The cargo, which was seized on May 18, included 10,117 pieces of apparel and footwear from such storied brands as Christian Dior, Versace, Gucci and Nike, CBP said in a news release.

In addition, 47,490 counterfeit Cialis pills were discovered in the bust. Cialis is the brand name for the drug Tadalafil, which is used to treat erectile dysfunction. Previous customs violations have revealed pills that were contaminated or filled with mundane materials rather than medicinal products, CBP spokesman Jaime Ruiz said.

“We’ve found in the past that it’s just chalk, like what we use in schools,” he said. “No active ingredient.”

Ruiz said officials use sophisticated software systems “to see anything that is out of the norm” coming into the country. Officers then inspect the cargo for potential signs of counterfeit goods, such as vague customs declarations or cheap packaging.

“They don’t invest much in packaging,” Ruiz said of counterfeiters. “It’s like a very big expensive [bag], and it’s in a plastic bag.”

CBP officers and U.S. Homeland Security Investigations special agents recovered the goods and turned them over to the Los Angeles Police Department, which is in charge of investigating the shipment’s U.S.-based recipients, according to Ruiz. It was not immediately clear whether the shippers in China would be prosecuted, he said.

Aside from businesses that profit from the lucrative counterfeiting operations, Ruiz said shoppers have a responsibility too.

“We’re not going to enforce our way out of the counterfeiting problem,” Ruiz said. “It’s such a huge problem. It’s so profitable that this problem is [only] going to end the day that consumers stop buying counterfeits.”

“If it seems too good to be true, it probably is,” Ruiz said. “If you’re buying something specially online, go to the legit retailers.”

The seizure was the latest interception of counterfeit goods in the United States, the CBP reported. Last Tuesday, officials in New York identified 19 fake Rolex watches with an estimated retail value of $285,000. The agency also reported snagging 85 counterfeit guitars at Washington Dulles International Airport in March that would have fetched roughly $260,000.

In the last fiscal year, CBP seized 26,503 shipments of counterfeit goods nationwide worth nearly $1.3 billion, according to the agency.